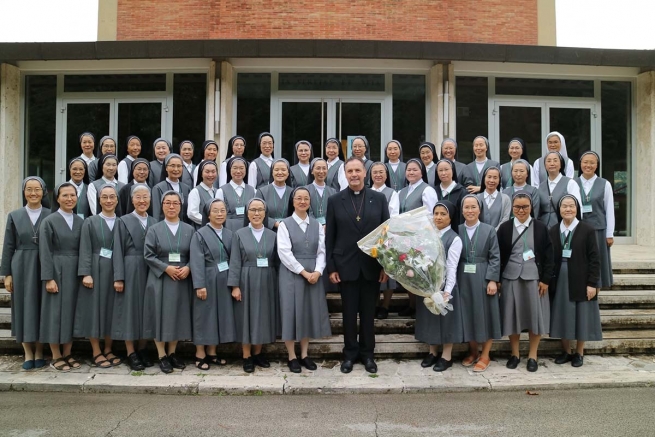 (ANS - Ariccia) - The 18th General Chapter of the Sisters of Charity of Jesus (CSJ), 11th group of the Salesian Family, opened on Wednesday 6 October 2021, with the Eucharist presided over by the Rector Major of the Salesians, Fr Ángel Fernández Artime. The General Chapter, with the theme “Renewed by the Spirit of the Risen Lord: All Together for Our Common Home” is called to explore new ways of mission, community,  and religious life.

In the homily for the Opening Mass of the General Chapter, the Rector Major invited the sisters to let themselves be guided by the Holy Spirit: "Only the Holy Spirit, in this hour of your General Chapter, can be the bond of unity and communion. Only He can arouse and welcome diversity without interrupting communion. This is why, it seems to me, my dear Sister Chapter members, that you have this wonderful challenge before you: if you want to continue always in fidelity to the call of God in your charism, you will have to make sure that this Assembly is always inhabited by the Holy Spirit, the true and only key player in every discernment."

The CSJ Institute had initially planned to hold the General Chapter in Japan, the country where the Institute was founded in 1937. But due to the Covid-19 pandemic, it providentially decided to carry it out for the first time in Italy, the home of its Founder, Fr Antonio Cavoli SDB, and of the Co-founder, the Venerable Fr Vincenzo Cimatti, SDB.

As part of the Chapter work, the election of the Mother General and her Council is planned next week, Thursday 14 October; while the closing of the GC18 is scheduled for the following Thursday, 21 October, with the concluding Eucharist again presided over by Rector Major Fr Á.F. Artime in the Basilica of Mary Help of Christians in Turin-Valdocco.

With regard to the guiding theme of the General Chapter, it was then divided into three sub-themes:

1. Together protect the integrity of our common home (Creation)

2. Together build the common home (Interculturality)

The first point is clearly linked to greater ecological sensitivity: "We are trying to make changes in our lifestyles to look after our common home with the spirit of Laudato Sì," say the sisters.

The second point speaks of the enhancement of differences within the Institute. The CSJs explain: “After about 80 years from the foundation, our congregation expands on 16 countries and the members come from 10 countries. But 90% of the members come from Japan and South Korea, while few members come from other countries. We have, therefore decided to deepen this theme to avoid the tendency to make the culture and customs of the majority of the community dominant and thus to hinder true intercultural communion.”

Finally, the third point speaks of the "outgoing" Church. “Around us, there are many families who are experiencing many difficulties due to Covid-19. We are trying to find a way to engage in the apostolate of families, with that spirit of initiative and flexibility experienced by the first CSJ in assisting poor and abandoned children and elderly" -conclude the sisters as a closing remark.