Brazil - Bororo and Xavantes: attention to a pastoral mission 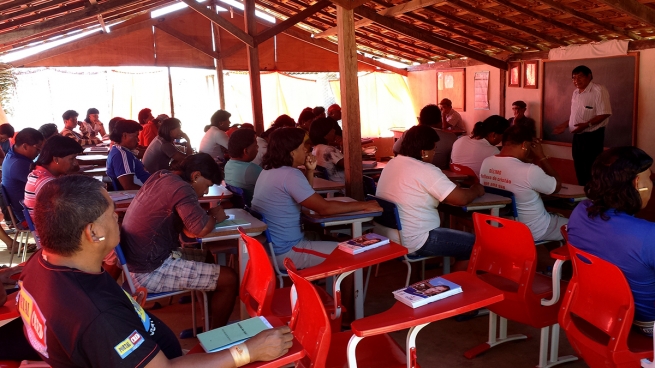 (ANS - Mato Grosso) - The Bororo, also known as "Parrudos", are an indigenous people of Brazil's Amazon state of Mato Grosso who distinguish themselves as producers of handicrafts and body paintings of great artistry. The Xavantes are another ethnic Amerindian group living in Mato Grosso; numbering about 800, they define themselves as "real people," and practice ear piercing as an initiatory rite. For years, the Salesians have held their pastoral missions with both the Bororo and the Xavantes, two culturally and historically distant communities.

Between 19 and 23 June, a total of 60 Indigenous people gathered for the Xavantes Pastoral Agents Course 2017 in the itinerant parish of "San Domingos Sávio" in the village of Santa Clara - Terra Indigena Parabubure, Campinápolis.

The meeting focused primarily on forming the leaders of the liturgical animation of its communities. An important step taken by the parish refers to the formation of ministers of the Word, the study of women in Scripture, the implications of Brazil's current political situation, the role of women in Xavante's indigenous culture and acculturated liturgy.

In addition, the Salesians in Brazil also work with Bororo communities for which they organized the "Bororo Culture Week" which took place at the "Koregedu Paru" Indigenous State School in the village of Côrrego Grande - Terra Indigena Teresa Cristina, which spotlighted the specific, differentiated, intercultural, and indigenous formation within the community.

July 11 was the day of the event's official opening. The entire event was filmed and documented by the Bororo themselves and transmitted to the media. A large wall painting featuring original Bororo artifacts, photos, school work was raised. Children and young people were dressed and adorned in traditional dress and many local products were served - fish, game, native tubers, palm fruits and various types of chicha drinks. From loudspeakers, traditional music was broadcast and occasionally interrupted by the words of the village elder, José Américo Akaru Kurireu, or village chief, Bruno Tawie.

It is worthwhile remembering that both the Xavantes and the Bororo are communities that for cultural and historical reasons live in isolation.