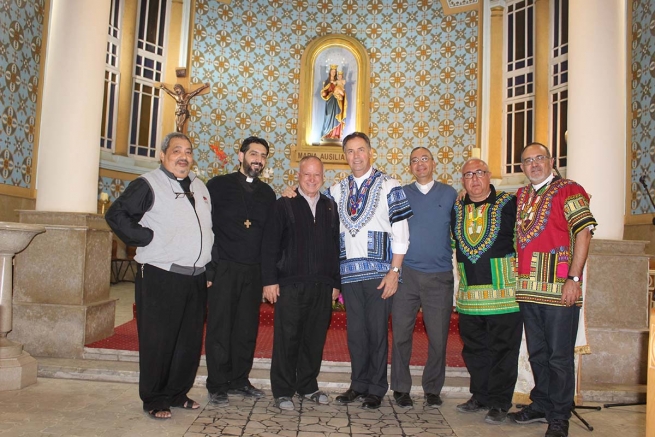 (ANS - Cairo) - "You are the future of Egypt: in science, in culture, in industry ...". With these words full of encouragement for the construction of a reality made of prosperity and peace, Fr Ángel Fernández Artime, Rector Major of the Salesians, greeted the young students of the Salesian presence in Alexandria, Egypt, the last stage of his visit among the houses of the spiritual Sons of Don Bosco in the countries of the Middle East.

The Rector Major's journey to the Land of the Pyramids began in the late evening of April 9, with his arrival in the capital, Cairo, directly from Beirut, Lebanon.

Fr Á.F. Artime spent the following day entirely in the city, visiting both houses - Rod El Farag and Zeitun - and meeting with the Salesians present throughout the country in the morning and with the members of the local Salesian Family in the afternoon.

Wednesday 11 and Thursday 12, the 10th Successor of Don Bosco spent in Alexandria where he was received with great enthusiasm by all: Salesians, school staff and students of the various levels of the institute, which includes kindergarten, elementary, middle and high schools, and the Italian “industriale” secondary school.

Fr Á.F. Artime dedicated some of his time to each. He animated the Salesians, the Daughters of Mary Help of Christians and the Salesian Cooperators active in the city. Then he made himself available with patience and kindness to the many requests for photos and selfies, coming mainly from the children and youngsters of the oratory, all of Muslim faith.

Then he talked with the students of the various courses of the Salesian institute and pointed out to them the example of the first students of Don Bosco: like them, even the youths who study today in Egypt and are formed as honest citizens will know how to set and lay the foundations of a new development that will benefit the entire nation.

Finally, speaking to the teachers, he reminded them that more than the concepts or notions of their individual academic subjects, the students will remember forever their attitude, the love received from them, why he encouraged teachers to follow and practice the Preventive System.

Fr Á.F. Artime, accompanied throughout the journey by his Secretary, Fr Horacio López, then left for his journey to Rome.