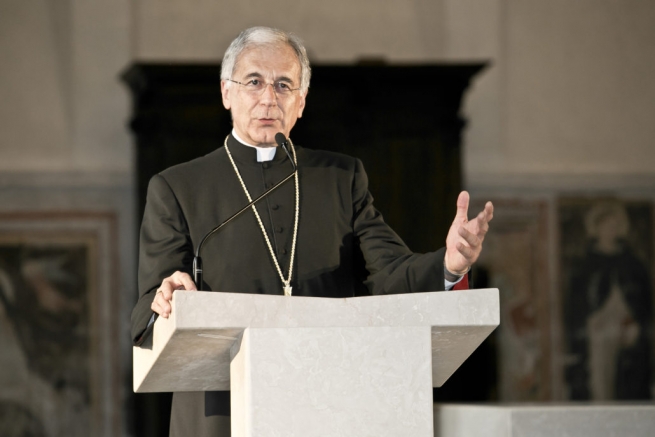 (ANS - Turin) - After a long journey of preparation, the celebrations for the 150th anniversary of the consecration of the Basilica of Mary Help of Christians in Turin reach their climax tomorrow, June 9th 2018. On the exact day of the anniversary, Msgr. Renato Boccardo, archbishop of Spoleto, will preside over a solemn Eucharistic Concelebration, inside the Basilica.

The presence of the archbishop of Spoleto is not accidental and Fr Guido Errico, director of the community of Mary Help of Christians of Valdocco, explains why: "St. John Bosco in two 'good nights' to the young men of the Oratory (in 1862 and 1865) declares his enthusiasm and his joy for some coeval prodigious events in Spoleto, linked to a Marian effigy. He felt a special harmony with the title with which the then archbishop of the Umbrian city, Monsignor Arnaldi, had baptized the Marian image (Auxilium Christianorum) and declared to one of the first Salesians, Giovanni Cagliero: 'So far we have celebrated with solemnity and pomp the feast of the Immaculate, and on this day the first works of the Festive Oratories have begun. But Our Lady wants us to honor her under the title of Mary Help of Christians: the times are so sad that we need that the Blessed Virgin help us to preserve the Christian faith."

"It seemed moreover opportune to the Salesian community," continues Fr Errico, "to invite the successor of that pastor of the Spoleto church, who suggested to the saint of young people the title of the Basilica he built, in obedience to the Virgin Mary, after the well-known dream of 1845."

The solemn Mass shall be celebrated at 10.00 (UTC + 2) and broadcast worldwide via satellite by TELEPACE HD (channel 515 Sky), in collaboration with "Missioni Don Bosco". The live streaming will be accessible on the website: www.missionidonbosco.org and sdb.org.

Concelebrating the Eucharist together with Msgr. Boccardo and many other priests will also be Fr Stefano Martoglio, Councilor for the Mediterranean region, representing Fr Ángel Fernandez Artime, X Successor of Don Bosco.

Furthermore, for the anniversary, a candelabra will be donated to the basilica to be placed in the presbytery, a work by the sculptor Ettore Marinelli. The work was commissioned to the Pontificia Fonderia di Campane Marinelli by several entrepreneurs, as a sign of gratitude to the Lord and to the Virgin.