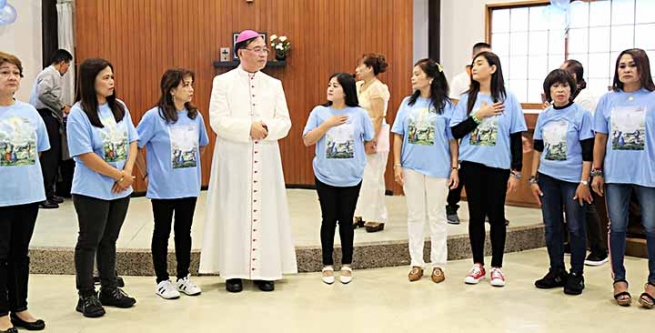 (ANS - Urawa City) - In his first message to the diocese of Saitama, the Salesian Bishop Mario Yamanouchi wanted to share the story of his life and his vocation with the religious and the laity.

The message is divided into six parts: the first part is given to thanks and prayer requests; the second narrates his first exodus from Japan to Argentina, together with his parents and brothers; the third describes his return to Japan. In the fourth part the prelate speaks of his journey to be "a shepherd with the smell of sheep". In the fifth section he speaks of the "vast, wonderful and unknown field", which is the diocese of Saitama. Finally, in the sixth and last part, he underlines the importance of living as witnesses of the risen Jesus.

"As Pope Francis did in his first greeting from the balcony of St. Peter's, on the evening of the election, I too ask each of you to pray for me and, for my part, I send you my blessing," says Msgr. Yamanouchi.

"In life there are exoduses that mark our existence. In my case, the first was in 1964, when I was eight and a half years old, and my parents decided to emigrate from Japan to the other side of the globe," he continues.

In February 1997, however, he returned to Japan. Mgr Yamanouchi says that, at the time of this second exodus, he was 42 years old and was "an Argentine with the face of a Japanese." After a year in the prefecture of Oita, he wondered if he had not to return to Argentina and all replied: "it depends on you."

Now, as bishop of Saitama, Msgr. Mario Yamanouchi has a much-variegated reality before him.

"In the diocese there are 54 parishes distributed in 11 areas, with 51 priests and 5 permanent deacons. We have 4 male congregations and 17 female congregations. There are 19 kindergartens, 4 middle and high schools, 5 child care facilities and 2 nursing homes. My desire is to visit all the parishes and religious communities, not by e-mail, but in person", he states.

The message ends with an invitation to live as witnesses of the risen Jesus, creating a community attentive to the poor and the most needy.

Because of the multicultural composition of the diocese, the message is available in seven languages here.