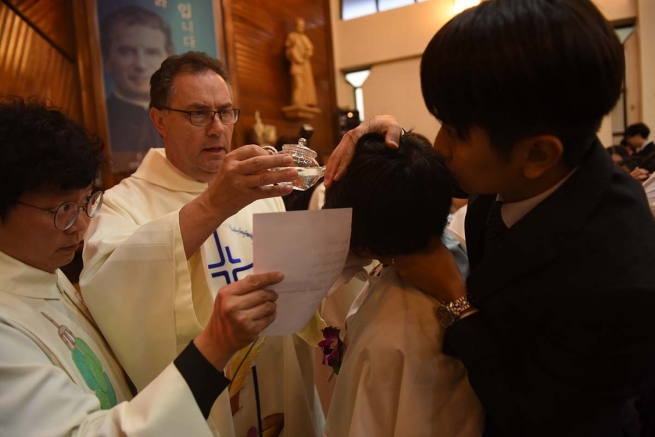 (ANS - Seoul) - He officiated baptisms, welcomed the promises of dozens of Salesian Cooperators, encouraged young people and religious to live their phase of life and their vocations fully. The Rector Major, Fr Ángel Fernández Artime, had much to do during the last days of his visit to South Korea.

The schedule for the fourth day of the Rector Major’s visit to the Korean province – 16 November 2018 – involved meeting with the Gwangju Salesian Family, students in particular. Gwangju is where the Salesian Society first arrived in Korea in 1954.

Unlike other SDB provinces, the Korean province has only one middle and high school. For that reason, the Provincial, Fr Stefano Yang, had asked the Rector Major to visit this school and its Salesians and lay partners.

Leaving the novitiate on the western coast at dawn, it was a three and a half hour journey down to Gwangju, the main city at the southern end of Korea.

Fr Ángel looked around the chapel and the history museum, which depicts the dedication of so many Salesians over 64 years. He was guided by the principal, Fr Michael Chang. In the chapel he prayed especially for the first Salesian missionary to Korea, Fr Archimede Martelli, who had established the school, and after whom the chapel is dedicated.

At the formal reception for Fr Ángel, the president of the alumni association, who represents 25,000 alumni, presented him with a bouquet of flowers, according to Korean custom. It was followed by a welcoming toast and singing. The choir sang the Spanish song ‘Eres tu’ for the Rector Major.

When they moved to the school auditorium, some 1,000 students and teachers welcomed him fervently. Among the students, there were two from the broadcasting class (1st year in high school, Park Jongmin, Han Hyeongseo) who had made videos of Fr Ángel's vocation story and a welcoming video for him.

What touched Fr Angel most was the welcoming speech of the student delegate who requested: “Please give strength and courage to the teenagers in this Salesian school at this time. Let us know the way of life.” Fr Ángel encouraged them as follows:

“I know that you face the challenging Korean examination system. Young people, I hope that you will be really happy. You must be happy. Don’t forget that you are truly valuable and priceless. You are what makes this nation beautiful.”

He bestowed ‘Salesio Prize’ scholarships on 15 students, and they sang the hymn “Here I am Lord” with gratitude.

In the afternoon the Rector Major went to the SCG Provincial house (Caritas Sisters of Jesus have three provinces in Korea: Seoul, Suwon, Gwangju). He has shown particular affection for the SCG throughout his visit, and repeatedly stressed their ‘consistency’. He also gave them a gift with these words: “The house where Fr Antonio Cavoli was born, which is located in Lombardy, now belongs entirely to the SCG. The complicated issue in the meantime has been solved.”

In the Salesian formation house in Gwangju, Shinan-dong community, a baptismal ceremony of 62 youth had been prepared. Fr Ángel created a sensation by reading the prayers in Korean.

The newly baptised dedicated spiritual gifts that they have been preparing beforehand, as a return for this exciting moment. These spiritual gifts included: Our Fathers 596; Hail Marys 519; Holy Masses 240; Personal sacrifices 266; Acts of charity 454; Brief prayers 261.

In concluding for these special spiritual gifts, Fr Ángel gave out small statues of Don Bosco to the new baptized as well godfathers, godmothers and all young friends who had joined the baptismal ceremony.

On the morning of the 5th day of his historic visit to the Korean province – 17 November 2018 – Fr Ángel attended the meeting of the provincial council held in provincial house in Seoul.

At lunch, there were some special visitors for him: the Apostolic Nuncio to Korea, Archbishop Alfred Xuereb, and Cardinal Andrew Yeom Soo-jung, the Archbishop of Seoul. The Apostolic Nuncio, who was born in Malta, had a delightful conversation recalling his close friend Salesian Fr Fabio Attard, also from Malta, Councillor for Youth Ministry. In their childhood, they had often played together at the Salesian Oratory.

Fr Ángel was keen to stress to the Apostolic Nuncio that he saw the image of Don Bosco's own times in the youth he had met at the Daerim-dong oratory and was very touched by it.

The Church superiors praised the Salesians for their wonderful contribution to the Korean Church, and asked them to continue their dedication to Korean youth in need.

Then, approximately 480 members of the Salesian Family and benefactors attended the Mass presided by the Rector Major during which 56 Cooperator aspirants took their promise, though it was nearly only 55 - one woman was rushed to the emergency department at the hospital. However, despite her illness, she finally was able to attend Mass to take the promise. Fr Ángel was impressed by her eagerness to become a Salesian and gave her a special blessing during the liturgy.

Fr Ángel heaped praise on the Cooperators and the Salesian Family gathered in large numbers. He was delighted. He explained that Salesian Family is a huge one, consisting of 31 groups and 340,000 people. He said that among them are 32,000 Cooperators "and tomorrow there will be 32,056!"

"Our numbers are large but it doesn’t mean that 'We are great! We are strong.' It means 'We have great responsibility.' The life of a Salesian Cooperator is simple but it has a profound meaning. Reveal your identity as sons and daughters of Don Bosco."

The FMA provincial house, which is located 5 minutes from the SDB provincial house in Seoul, was filled with FMA Sisters for the Rector Major's visit on his final day in the Korea province – 18 November 2018.They listened attentively to Fr Ángel's words to them.

A line that touched them much was the comment that “I sincerely hope the next Salesian Rector Major will be able to visit North Korea.”

During his conference and later in his homily, Fr Ángel told the Sisters: “Beware the temptation towards security. Seeking security in religious life should be avoided for all Salesians. No one has a future when they pursue their own security and protection in religious life in either of our Congregations. Let us pray for the world. And let us not forget those who are suffering. Above all, let us pray for youth, especially those who are in difficulties. And also let us pray for those places where people are suffering through war. The Lord wants you to become his holy word in today’s world, a Gospel. Also, you should love the Holy Father, Pope Francis. There are some people who don’t like him. They are people who are loyal to their own ideals, not to the Holy Spirit’s.

There are courageous confreres and sisters among us. They are the ones who are willing live there lives with the most impoverished youth.

In fact, these kinds of people make us uncomfortable. Sometimes they have to stand up against the brothers and sisters of their own community. But they are the ones who are living our charism. Each of us should strive to become one of them.”

Fr Ángel sought to encourage the Sisters, expressing his concern for them, embracing them and proving photo opportunities.

Following his visit to the FMA, Fr Ángel departed the Korean peninsula from Incheon International Airport. There were around 20 Salesian Family representatives who came to give their farewell to him and he gave each a big hug.

The visit, with its memories of embraces, photos, handshakes and, above all, inspiring words and moments, will remain a wonderful memory for the entire Salesian Family in Korea.

The photos of the Rector Major's visit are available at ANSFlickr.