Peru – Initiated the Cause of Beatification and Canonization of Father Luigi Bolla, Salesian missionary 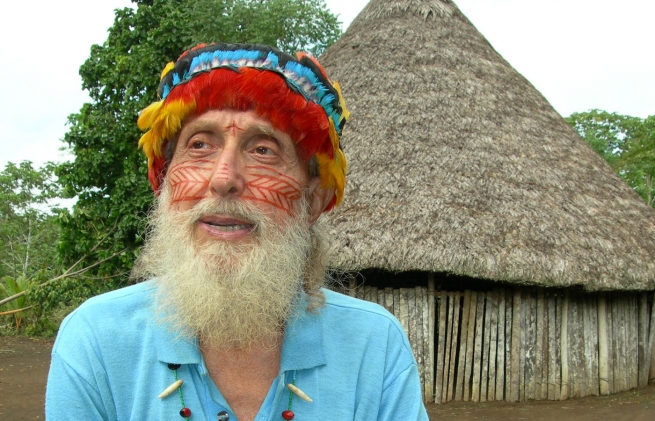 (ANS – Lima) – On 1 August 2019, the Provincial Vicar of Peru, Fr Humberto Chávez, and Fr Vicente Santilli, officially presented to the Archbishop of Lima, mons. Carlos Gustavo Castillo Mattasoglio, the Supplex libellus, that is the official request with which the Salesian Congregation asks the opening of the diocesan Inquiry on the virtues, the fame of holiness and signs of Fr Luigi Bolla, SDB: an original witness of consecrated life, evangelization and inculturation of the Gospel and the Salesian charism in 60 years of life shared fully with the indigenous Shuar and Achuar peoples.

Luigi (Luis) Bolla was born in Schio on 11 August 1932 from a deeply Christian family. At the age of 12, in the chapel of the oratory, he heard a voice saying: “You shall be a missionary in the jungle among the natives and you will give them my Word. You will walk a lot on foot.”

He made his first Salesian vows on 16 August 1949. In 1953, at the age of 21, he left for Ecuador, where after his theological studies, he was ordained a priest on 28 October 1959. He had quickly learned Spanish and the Shuar language, but the call of the Lord was another: He wanted him to give his life to the Achuar people. Noting that the greatest number of Achuar was in Peru, in February 1984 he passed definitively to that Province to work in the Apostolic Vicariate of Yurimaguas. Years of solitude and isolation awaited him because of the distance and lack of confreres with whom to form a community. Without losing his Salesian and priestly identity, he identified himself with the Achuar people. Despite dangers and difficulties of all kinds, he never lost faith in God. He continued to study the customs, ethnology and culture of the Achuar.

His main mission was always to proclaim the Gospel to all the Achuars, whom he loved as children. At the same time, he worked tenaciously to accompany the Achuar people in their organization, encouraged their education and took care of the health and development of these people, who loved and appreciated him, calling him: “Yánkuam’ Jintia: Light star of the path”. He died in Lima on 6 February 2013.

The Rector Major, Fr Ángel Fernández Artime, wrote: “The spiritual and cultural heritage of Father Bolla is extraordinary and the start of his Cause of Beatification allows us to preserve, deepen and transmit it. Moreover, the relevance of this Cause is the great breadth it takes in relation to the celebration of the Synod of Bishops on the theme of Amazonia: new paths for the Church and for an integral ecology. A Synod that, as Father Bolla did, starts from listening to the indigenous peoples and communities living in the Amazon.”

With the Cause of Father Bolla, the number of candidates for sanctity of the Salesian Family rise to 171.