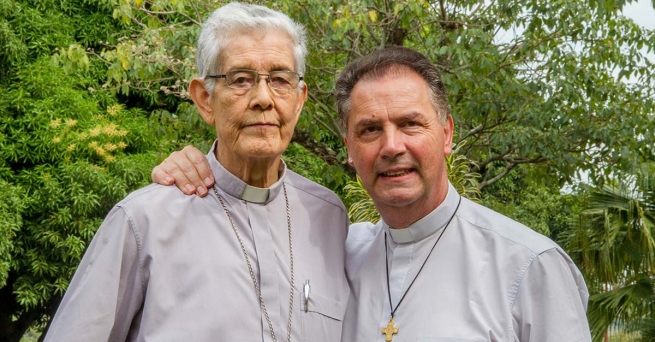 (ANS - Asunción) - "A great man is gone, friend of all, who has done so much for the children of Chaco ... a great priest, a great bishop," said Msgr. Gabriel Escobar, SDB, Bishop of the Apostolic Vicariate of Chaco Paraguayo, in dismayed comment on the death of Salesian Msgr. Zacarías Ortiz Rolón, Apostolic Vicar emeritus of Chaco Paraguayo and Emeritus Bishop of Concepción-Amambay. The prelate died yesterday, 6 January 2020, at the Central Hospital of Asunción.

"When the Holy See appointed me bishop of Upper Paraguay, I had to go because we are children of obedience. I arrived in Fuerte Olimpo towards the end of June 1988, accompanied by 7 bishops, while the Paraguay river was in full growth," said Msgr. Ortiz when he narrated his beginnings as a bishop.

He was born on September 6, 1934, in Arroyos and Esteros, a place where he spent most of his childhood.

On January 31, 1955, he made his first religious profession. He studied Philosophy and Theology in the Salesian institutes of Cordoba (Argentina) and then specialized in Educational Sciences at the Catholic University of Asunción and at the Salesian Pontifical University of Rome, where he obtained his License in Pastoral Catechetics. He was ordained a priest in Cordoba on August 14, 1965.

In 1985 he took on the role of Salesian Provincial of Paraguay, being the first Paraguayan Salesian to carry out this service. In 1986, together with Msgr. Alejo Ovelar, who later became bishop of the Apostolic Vicariate of Chaco, he attended to the blessing of the land where the future boarding school Ñu Apu'apu'a would arise. "Bishop Obelar," Msgr. Ortiz said, "brought me and showed me the land where the future school would be built. I remember that we had no other type of water except that of the ditch, for the blessing of the place. So I drew that same water with my hands so that Msgr. Ovelar could sprinkle the ground. So it was a blessing Sui Generis."

On March 12, 1988, Pope John Paul II appointed him bishop. He was consecrated in the Cathedral of Asunción on the following 26 June and took possession of the Apostolic Vicariate of Chaco on 1 July of the same year, succeeding Msgr. Alejo Ovelar.

On July 13, 2003, after 15 years of pastoral work in Upper Paraguay, Pope John Paul II appointed him Bishop of Concepción and Amambay.