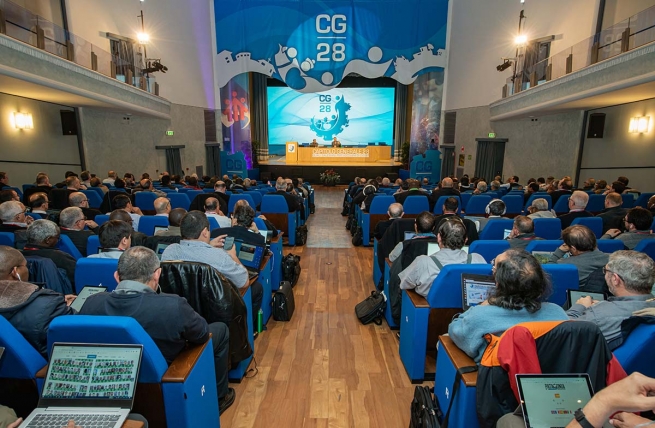 (ANS - Turin) - "We are in Valdocco, we are from Valdocco": not only a statement, but also greetings for the Salesians arriving in Turin - Valdocco to participate in General Chapter 28. These are the words expressed by Fr Stefano Vanoli , Chapter Regulator, in what can be called the pre-chapter "Good Night" on the evening of Saturday, 15 February.

The Capitulars will be intensely busy for the next few weeks until April 4, the closing date.

A Chapter in Valdocco to give strength to the vocation and charismatic identity of Don Bosco's disciples.

There are 66 nations to which the Chapter members natively belong, which for their mission are present in over 130 countries.

23 people attended the first General Chapter which took place in Lanzo Torinese in 1877, presided over by Don Bosco. Today, having arrived at GC28, the Chapter Members have more than multiplied: 242 in total among participants as per Law, such as the Provincials and the elected Delegates, and the permanent guests as observers, appointed Provincials, Delegation Delegates.

Let us not forget that among the participants by right are the 16 confreres of the Central Office and the Rector Major emeritus.

To these already abundant numbers, the young and lay collaborators invited to participate for a week are to be added.

All these numbers tell of a universal and missionary Congregation which finds, in the distinction of origins and languages, experiences and personal stories, the highest moment of convergence and unity.

Today, Monday 17 February, the presentation reports of the Sectors and Regions by members of the General Council begin.

Tomorrow, Tuesday 18 February, the Rector Major's report on the state of the Congregation will be broadcast live on the ANS Facebook page.