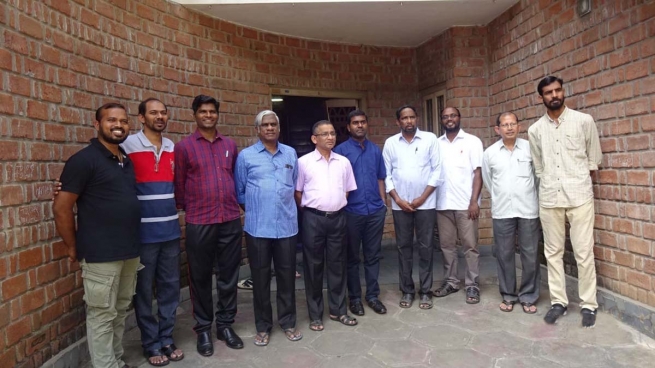 (ANS - Ravulapalem) - Fourteen Salesians, seven from the Chennai Province, five from the Hyderabad Province and two from the Bangalore Province, attended a three-day meeting (3-5 February) of the Salesian Social Forum held at the headquarters of the Salesian NGO PARA (People's Action for Rural Awakening) in Ravulapalem at what is also home to the "Center of Justice and Peace", the psychosocial services and legal assistance center of the Hyderabad Province.

Much of the meeting's first day was dedicated to the research of the group's identity in the wider context of the rediscovery of one's individual identity: a process that requires abandoning the superstructures of roles to recover one's individuality and common humanity, remaining open to everyone's contributions and without making disparities on a clerical or seniority basis.

Subsequently, the group engaged in an in-depth analysis of the country's current socio-political situation, marked by an erosion of democracy and the emergence of worrying extremist tendencies. The Forum unanimously expressed itself on the need to speak openly to the authorities as a means of safeguarding democracy and the Constitution.

During the work sessions, the issue of protection of minors and cases of sexual abuse and power, both in the Church and in society, were also addressed. After lengthy discussions, the participants focused on strategies to prevent the formation of structures that lead to abuse of power, such as avoiding the culture of privileges.

In this struggle for justice, the participants called for the need to put pressure on the media and authorities to bring to light the rampant and daily abuses suffered by the population belonging to the humblest castes and tribals.

In the course of the work, an analysis was made to see how much the theory corresponds to daily practice in Salesian life, regarding the three areas of obedience, poverty, chastity, community life and mission.

Finally, they asked to bring the requests and the vision of the SSF to the General Chapter of the Congregation, which is taking place in Turin-Valdocco these days, and to work to integrate good practices that promote Gospel values and Human Rights.