Italy – St. Joseph and the art of custody
Featured 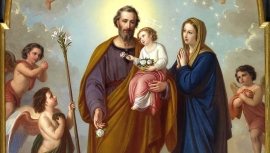 (ANS - Turin) - On the altar of St. Joseph in the Basilica of Mary Help of Christians in Turin there is a large painting by the painter Lorenzoni, representing the Holy Family. It is an invitation for every Salesian work to be a family and for the educational style to be based on family relationships. But also an invitation to recover the spiritual and educational centrality of St. Joseph, in a world that so much needs fathers.

Two writings appear on the canvas. The invitation "Ite ad Joseph" - "Go towards St. Joseph", in the ribbon held up by angels; and then, in the entablature of the tympanum, the biblical verse: “constituit eum dominum domus suae”, that is, “he made him lord of his house”. Perhaps this is one of Don Bosco's secrets. To go to Jesus, as well as certainly referring to Mary, Don Bosco remembers the figure of Saint Joseph. This is why, as the writing says, we must "go to Joseph". Not to stop with him, but to be accompanied to Jesus. Perhaps for this very reason Don Bosco wanted him to be "lord of his house". Valdocco is thus a school of fatherhood and sonship.

St. Joseph exercises his custody - of Mary, of Jesus, of the Church - with discretion, with humility, in silence, but with a constant presence and total fidelity, even when he does not understand. From the marriage with Mary to the episode of the 12-year-old Jesus in the Temple of Jerusalem; he is beside Mary in the serene and difficult moments of life, on the journey to Bethlehem for the census and in the anxious and joyful hours of childbirth; in the dramatic flight into Egypt and in the frantic search for his son in the Temple; and then in the daily life of the house in Nazareth, in the workshop where he taught Jesus his trade. Joseph thus lives his vocation as a guardian in constant attention to God, open to His signs, available to His project, not so much to his own.

In him one can see how one responds to his vocation, with availability and promptness; but we also see what the center of the Christian vocation is: Christ. Guarding, keeping, preserving Christ in your life, to guard and preserve others!

After all, everything is entrusted to the custody of man, and it is a responsibility that concerns everyone, because everyone is called to be custodians of God's gifts! It is therefore easy to imagine Saint Joseph as a model for parents, educators, anyone who takes care of someone.

In addition to this, Joseph teaches to "guard or keep the mystery".

We must accept that we do not understand everything, especially God's wishes. The more we trust and entrust ourselves to God's will, the more we become children. This is a long apprenticeship, a very complex school. A school, Pope Francis still reminds, which "disturbs us", which "makes us go so many times on roads that we do not want". For St. Joseph, it was so.

Don Bosco too had to gradually learn to be a son by accepting to do God's will. May Saint Joseph help everyone to be fathers and to be children.