RMG – "Don Bosco, the power of the word and the gift of relationship"
Featured 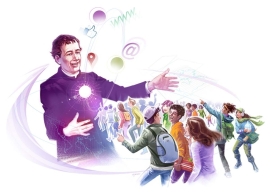 (ANS - Rome) - Continuing the series of the ten articles by Fr. Gildasio Mendes, General Councilor for Social Communication, on the theme "Don Bosco and Digital and Virtual Reality," today we delve into another facet of the communicative skills of the Founder of the Salesian Congregation. This time, the specific focus is on "Don Bosco, the power of the word and the gift of relationship."

Communication is born through word!  The first  thing a baby learns to say, the very first words, are a (usually brief) version of Mother! Father! perhaps just “mum”, “dad”.   The Word is the beginning of communication.  According to the book of Genesis, God creates the human being and all things by speaking, giving names, giving life… through the power of word!

We  are intrinsically  people of words. Through words we develop a personal encyclopaedia to define who we are, what we do, how we interpret everything that exists around us. Through words we build up a language. Through language we communicate with each other.

Historically, we human beings have created words and  developed language, and through it we have developed as social beings in all our cultural environments.

The digital world, too, is about words and languages. Codes are words of a kind in writing. Bits and bytes are words. All computer systems and software are languages. Apps are languages. In the  area of computer technology, information and  virtual reality, cyphers are transformed into language, codes,  and algorithms  are languages.

When doing computer programming, we are dealing with words that combined with numbers/cyphers become computer code, a language that allows us to interact with the computer. Interactions between systems within internet networking are like an encyclopaedia.  One example is how Wikipedia is designed, allowing us to interact between one place and another virtually through words.

Human words and languages, however, have deep meaning. They are not just phonology, morphology, syntax... or a technical tool of communication.  They have to do with meaning and depth. Words reveal us, bring forth what we think and feel as human beings.  Language is therefore our expression of being, loving and believing. Through language we learn to manage ourselves in the social world and to take decisions and be proactive in the space we occupy in this world.

The word expresses emotions, feelings, values. It is the  voice of the human  heart and soul.  Word and language express who we are.

Language  therefore  has a hidden dimension, a part of the mystery that we are, that life is. This is the reason why, during our lives, we find new words to express new experiences, new discoveries, new realities.

A further and complementary aspect of expressing ourselves through words is relationship. The word leads to human relationships.  The word is given to us to  speak, to create, to dialogue and to create our own world.

Don Bosco was a man of words! He managed language for living and to educate!

From his childhood till his last words before his death, he used  words to express his deeper being and belief. Let me refer here to  his dream at nine years of age from the perspective of the power of word  and language. It may help us to better understand  why words are the mother of communication. He plays with words! He creates his own language!

He says (all excerpts from the Daniel Lyons SDB translation, 2010): “In this dream I seemed to be near my home in a very large yard. A crowd of children were playing there. Some were laughing, some were playing games, and quite a few were swearing. When I heard these evil words I jumped immediately amongst them and tried to stop them by using my words and my fists.”

Interesting that he describes that what shocked  him at this part of the dream was their “evil words”. Bad language! Power of words! Words that reveal the sad situation these youngsters were facing in their lives.

Don Bosco continues: “at that moment a dignified man appeared, a nobly-dressed adult… He called me by name, told me to take charge of these children.”  The dialogue begins with terms that are opposites:

Ugliness of sin – value of virtue

Don Bosco expresses himself by replaying that he “was only a poor ignorant child, [he] was unable to talk to these youngsters about religion”.

Don Bosco  asked: “Who are you, ordering me to do the impossible?”

The Person in the dream  said:  “Precisely because it seems impossible to you, you must make it possible through obedience and the acquisition of knowledge.”

Don Bosco  poses a profound question: “Where, by what means?”

The dialogue goes on. Now the Person responds to his question:

“I will give you a teacher. Under her guidance you can become wise. Without her all wisdom is foolishness.”

Through the use of language the dialogue opens up more and more… Being is being expressed, deep questions emerge….  The desire to know who his interlocutor is. Words in search of truth!

“But who are you that speak so?” John Bosco asked.

And then He said, “I am the Son of the woman whom your mother has taught you to greet three times a day.”

Language is a way the young John Bosco defends himself, finds security, an emotional reference, to solve a problem.

Don Bosco said, “My mother tells me not to mix with people I don’t know unless I have her permission. So tell me your name.”

Language is dynamic. Questions lead one to search, ponder,  consider, to face the truth of life and reality. Language goes with human beliefs and convictions.

Continuing his narrative, John Bosco then  “sees a Lady of stately appearance standing beside him. She was wearing a mantle that sparkled all over, as though covered with bright stars. Seeing from my questions and answers that I was more confused than ever, she beckoned me to approach her. She took me kindly by the hand and said, ‘Look!’” Which he did.

Language opens avenues to life and trust. Language is like a key to open doors, new horizons. “The youngsters had all apparently run away. A large number of goats, dogs, cats, bears and other animals had taken their place.”

The dialogue continues, again with terms that are opposites.

He continues narrating his dream:  “This is the field of your work. Make yourself humble, strong and energetic. And what you will see happening to these animals in a moment is what you must do for My children. I looked round again and where before I had seen wild animals, I now saw gentle lambs. They were all jumping and bleating as if to welcome that Man and Woman.”

Language is like an ocean. It is deep, sometimes very  complex.   Mysterious in some ways. It touches heart and soul and mind.  Through words like yes, no, maybe, human beings define their lives, their future, their real place in this world.

John Bosco expresses his deeper feelings: “At this point, still dreaming I began crying. I begged the Lady to speak so that I could understand her, because I did not know what all this could mean. She then placed Her hand on my head and said, ‘In good time you will understand everything.’

With that a noise woke me up and everything disappeared.”

After she had spoken… words with strong meaning and symbolism. Words that express the power of language, the gift of relationships!

Relationships is the destination of the word!!

Through relationship we expand our interpersonal communication and give sense and solidity to our words.

For Don Bosco  the word  “youth” becomes a language that deeply touched his entire life, heart and soul.  It becomes a  word of living, giving, communicating.  Through the language of the heart and soul he  touches the lives of those who knew him and learned of the great things he did for youth.

For him, the word becomes a project of life because the word that comes from God is a Word that illuminates his life and gives him the perseverance to give his life to what he loved and lived for: “I have promised God that I would give of myself to my last breath for my poor boys.” (Cf. C. 1).