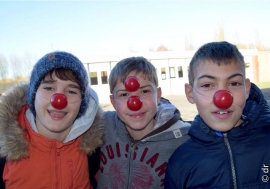 (ANS - Bailleul) - The Salesian Institute of the Immaculate Conception of Bailleul is carrying out a vast project in the current school year to support the initiatives of the solidarity association of "Les clowns de l'espoir" (Clowns of Hope), committed to bringing a smile to sick children. The 780 students of the institute have not only pledged to raise funds, but, as explained by the Dean, Prof. Isabelle Marcant, "the solidarity project would not have made sense if the young people had not been able to give joy."

"This year," continued Prof. Marcant, "for the competition of the 'Citizen Challenge' (a pastoral operation involving the Salesian centers of the entire "France-Belgium South" Province a/n). We did not want to elaborate a new project, but preferred to give another character to an existing project, that of the 'Clowns of Hope', on which we worked hard throughout the year."

The representatives of the association visited the Bailleu Institute and the students immediately started to organize a charity event in their favor. But they soon realized that the gesture of solidarity had a too simple meaning, reduced to money.

So then the approach changed radically: instead of focusing on the amount of money to be collected, they moved on to the message: "We are all able to give a smile."

In this way the students had the opportunity to carry out the project firsthand: the class representatives passed through the classrooms to transmit this message and managed to mobilize all the young people in this process. In the end, the involvement of young people fully adhered to what is the goal of the association "The Clowns of Hope": to bring hope and joy to hospitalized children, and remind everyone that anyone can do it!

Maïté Roth, head of scholastic activities, explained the different phases of the project carried out during the year:

October: meeting with class delegates to explore and discuss the project and plan the necessary steps;

November: sale of the classic red clown noses, during recess - with photos - and at the parents' meetings;

December: decoration of the institute's Christmas tree with garlands of red noses;

January: day of Open Doors of the institute on the theme of the circus, with tents in the courtyard; moreover, for the feast of Don Bosco, during the Mass the billboard composed with the photos taken in the previous months was brought to the altar with students and professors with a red nose;

April: solidarity race. The students and adults who wished to became sponsors of a competition for the benefit of the association "Les clowns de l'espoir".

June: all that remains to be done is to deliver the check to the association with the amount collected during the year, in the presence of the mayor of Bailleul.