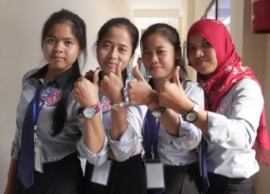 (ANS - New Rochelle) - Salesians throughout the world promote numerous projects aimed at promoting gender equality and the social emancipation of women. Cambodia, El Salvador, Mali and Sierra Leone are just some of the realities where so many women receive opportunities for their future.

The "Don Bosco" technical school in Kep City-Hatrans, Cambodia, has made several changes to school buildings and dormitories to make them accessible to students with physical disabilities. The positive effects of these interventions have been felt more strongly by girls and young women with physical disabilities, who otherwise would not have been able to access education and thus achieve self-sufficiency.

Run by the Salesians, the "Don Bosco" University, with headquarters in San Salvador, El Salvador, is one of the country's most prestigious institutions of higher education, especially in the technical and technological sector. In the past, many scientific and technological programs were attended mostly by men, but a special program designed to encourage the presence of women in science and engineering courses, and the "Science Camp for Girls" launched in 2013, are filling this gap.

In Mali, a country that since 2012 has experienced a political and security crisis, the Salesian Family has committed itself to the most vulnerable populations to support local development and strengthen the role of women in rural communities. A soap production training course was started and has benefited 50 young girls and young women from the village of Touba. The course also enabled the students to start up micro-businesses to sell what they produce, and also provided special spaces to encourage socialization among the participants.

Finally, in Sierra Leone, the experience created by "Don Bosco Fambul", the Salesian house of Freetown which, among its many projects, includes those for young victims of abuse and for those removed from prostitution, has become a model paradigm. Through psychological work, for the recovery of self-esteem, basic education and vocational training, hundreds of girls each year receive the opportunity to build a dignified future for themselves.

Throughout the world there are many barriers to education for young women and girls, but the Salesian programs work to enhance the value of diversity, gender equality and education for all.