Italy - 148th Salesian Missionary Expedition: "Without missionaries, many of us would not be here"
Featured 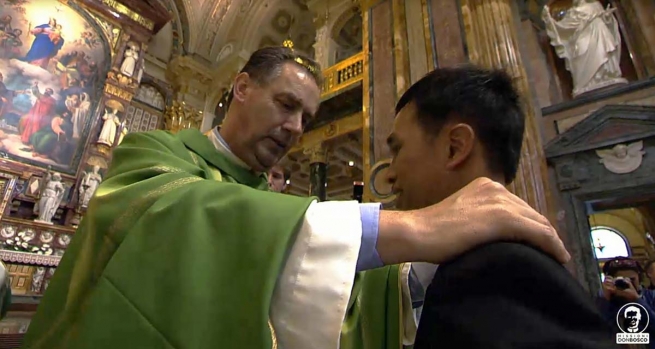 The Salesian missionaries came to this appointment after 24 days of preparation via the missionary orientation course, first at the General House in Rome, then at the sites of Don Bosco. The FMA also celebrated this year's 140th anniversary since their first missionary expedition, dated 1877, destination: Uruguay.

"Really the Salesian world is here ... We thank the Lord who has accompanied us for so long and does so many things through the Spirit that we do not even understand, or we understand only after a very long time," said the Rector Major at the opening of the celebration.

"Today we celebrate the 148th Missionary Session, as beautiful and authentic as the first and subsequent ones by Don Bosco and Mother Mazzarello." During the homily, he added, "148 consecutive expeditions that have never stopped, even in the years of the two world wars: this speaks to us of a reality that is beyond the human."

To the new missionaries, Fr Á.F. Artime also wished to spotlight the missionary work of Fr Tom Uzhunnalil, faithful to God and to his mission in Yemen, both in the period of his ordinary ministry and throughout the time and experience of his kidnapping.

To the missionaries, the Rector Major underscored the importance of feeling summoned to share life with the very people they would be soon be reaching, without the pretense of being there to teach, as experts; and he reiterated that the missionary dimension was, and remained, a fundamental option for the Congregation. "Without the missionaries, many of us would not be here," he said.

Finally, accompanied by the prayer of all those present, he consigned the Missionary Cross to the Salesian missionaries, while Mother Reungoat did the same with the FMA missionaries: all were sent across the globe to proclaim and live the Gospel of Jesus, in the charism of Don Bosco.