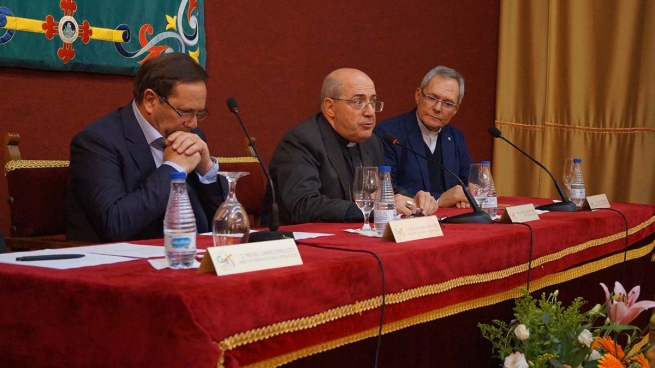 (ANS - Seville) - The Center for Catechetical Studies (CEC, in Spanish), of the Salesians of Seville, celebrated its 50th anniversary last November 10th. The celebratory event took place at the "San Juan Bosco" University College of Seville, and served to give recognition to the 50 years of formation initiatives in the field of catechesis, youth ministry and religious education.

The ceremony organized for the anniversary began, in a festive atmosphere, with the welcome of Salesian Fr Miguel Canino Zanoletty, CEC Director and moderator of the day, and continued with the greeting of Fr Ángel Asurmendi, Superior of the Province "Spain - Mary Help of Christians "(SMX), who concluded his intervention by saying: "Thank you for your work in the service of education and evangelization with a Salesian perspective. Now, forward for another 50 years."

Afterwards, the participants were able to listen to a historical excursus on the life of CEC, curated by Fr Miguel Ángel Moreno Nuño, professor of CEC; and the central intervention of the day, offered by Fr Juan Carlos Pérez Godoy, Provincial of Spain-Madrid (SSM) and National President of Catholic Schools; the latter, in his presentation, touched upon a very topical subject: the teaching of religion in Spanish public schools.

The event was closed by Msgr. Santiago Gómez Sierra, auxiliary bishop of Seville, who highlighted CEC's ecclesial identity and vocation.

The Center for Catechetical Studies started its courses in the academic year 1968-69, with 62 registered students (including also Rafael Bellido Caro, future first bishop of Asidonia-Jerez). That was the effervescent age of the post-Council, once marked by the desire for updating in the Church, one which also required a clear commitment to the formation of new pastoral agents: teachers of religion, catechists, leaders of Catholic schools, and related.

In a short time the CEC became a point of reference for the formation of teachers of religion, as well as for the theological formation of the laity. In its 50 years of life, in addition to an infinite number of courses and training proposals of various kinds, it has been able to give life to illustrious initiatives, such as the so-called "Catechetical Week"; the National Youth Ministry Days and the pioneering Master in Youth Ministry.

The CEC has gone through different epochs, contexts and situations. Every year, more than 200 students go through its classrooms and in recent years thousands of pupils, teachers and people continue to be involved.