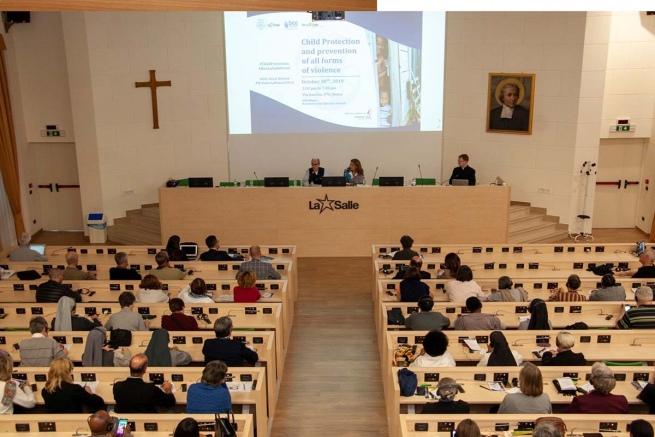 (ANS - Rome) – Taking place last October 30, on the occasion of the 30th anniversary of the Convention on the Rights of the Child (CDI), in the Aula Magna of the Generalate of the Brothers of the Christian Schools (Lasallians) in Rome, was the event: "Child Protection and prevention of all forms of violence". The Salesians also participated, invited for their specific and solid missionary work with vulnerable and at-risk youth in over 130 countries.

The event wanted to be an opportunity to compare missionary experiences, projects, programs and good practices among the institutions of Catholic inspiration that host and accompany children, both girls and boys, and adolescents in their path of growth and formation.

In compliance with the international mandate and, in the first instance, the urgency of committing resources and synergies to protect and prevent violence against minors in a perspective of accompaniment and post-traumatic rehabilitation, institutions and congregations met to discuss, but also to facilitate collaborations and networks around the protection of children, in order to enhance common action and increase the impact of individual initiatives.

The Salesians were present with Fr Daniel García Reynoso, from the Youth Ministry Department, and with Marcella Orsini, Head of the DON BOSCO NEL MONDO Foundation Project Office.

In his speech, Fr García presented the methodology for protecting vulnerable and at-risk children in the charism and in the Salesian mission, emphasizing the Oratorian Criterion and the Preventive System, the experience of the Pastoral Educational Community (CEP) and the importance of the Pastoral Education Project Salesian (PEPS). He completed his talk by presenting the work of the DON BOSCO IN THE WORLD Foundation in support of Salesian missions and for the promotion of projects that the Congregation develops through the Provinces and Planning and Development Offices.

In the other talks, divided into two round tables, it was emphasized that each form of violence against minors assumes a public dimension that calls for each institution to act with their specificities and charisms. Furthermore, several good practices were presented:

- those of the Marist Brothers, in Africa, and of the "Good Sheperd" Foundation in Sri Lanka "; the "sand grain methodology" used by the BICE in several South American countries; the initiatives adopted in Italian and Albanian Catholic schools; inter-congregational experiences for the promotion of the rights of children and adolescents; and the role of the "Resilience Guardian" in supporting children victims of violence.

All interventions highlighted the usefulness of equipping oneself with practical, emotional, psychological and relational tools in the fulfillment of child protection experiences from violence, so that they are effective and efficient in achieving the objective, among others, self-protection.