Lebanon – Apocalypse in Beirut. An eyewitness 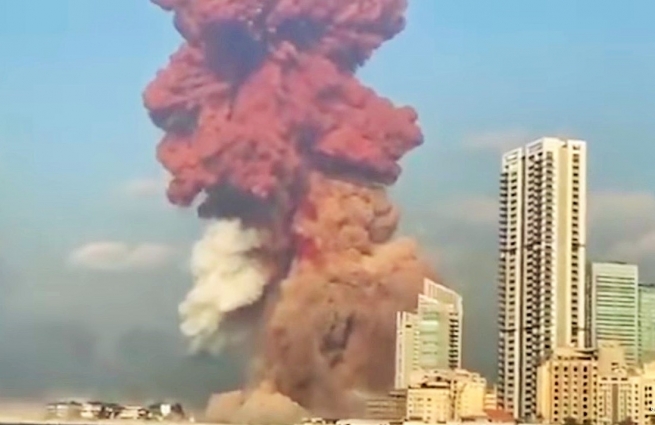 (ANS - Beirut) - Lebanon, already long shocked by an extremely serious socio-political and economic-financial crisis, subsequently aggravated by the Covid-19 pandemic, suffered a huge catastrophe on Tuesday, August 4, with the explosion of over 2,500 tons of ammonium nitrate carelessly deposited in a warehouse in the port of Beirut after being seized, some time ago, from a ship. The Salesians, present in the country with two works - Al Fidar, on the coast, and El Housson, on a hill in the interior, both about thirty kilometers from Beirut – have no victims, nor suffered direct damage, but suffer with all their population for yet another disaster that strikes and affects the local population.

The Beirut explosion has caused at least 137 deaths and about 5,000 injured. The shock wave spread over a radius of over 10 km, seriously destroying or damaging hospitals, places of worship, public buildings and private homes, as well as ships that were in the harbor or at anchor. About 300,000 people are estimated to have lost their homes and material damage is estimated in billions of dollars.

One of the Sons of Don Bosco active in the Land of the Cedars testifies: “If so far, as Salesians there have been no victims among our acquaintances, we have suffered more or less significant injuries and damage in many houses they live in. The home of a Lebanese confrere, Fr Dany El-Hayek, suffered serious damage, but, fortunately, his parents were in the mountains. Syrian and Iraqi refugees living in Beirut whom we care for are reporting to us not only the material damage of their homes, but also and above all the psychological shock suffered by them and their children. Having left their country to escape the war, they are now in a country in crisis and in a situation of very serious hardship.”

Lebanon, in fact, even struggles to care for its own citizens today and now finds itself with the capital suddenly devastated, after 30 years of slow and arduous reconstruction following the civil war. The country's civil and religious authorities are making appeals to the whole world. “Lebanon deserves the support of its brothers and friends, necessary to put its capital back on its feet,” the Maronite Patriarch of Lebanon, Bechara Boutros Rai, invoked in a statement.

The crisis, already serious, is now completely unsustainable and its consequences unpredictable, or rather, predictable for the worse.

In this situation, the Salesians try to contribute by offering an outlook of hope and relaunching an appeal to international solidarity: “If from many there is a cry of despair and anger at the unconsciousness of too many politicians and officials, including the port authorities from Beirut, to whom responsibility for yesterday's catastrophe is attributed, we launch a cry of hope looking above all at the resourceful and enterprising young Lebanese. We feel close to them and concerned about their future. The help we ask is for both them and for the Syrian and Iraqi refugees we care for.”