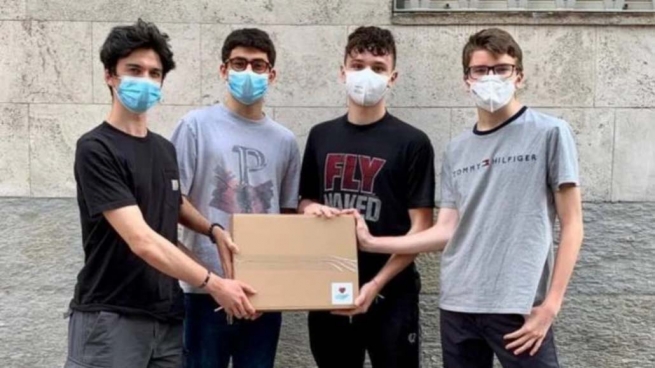 (ANS - Rome) - Since the first lockdown they have collected over 500 unused PCs and put them back together to give them to children and young people in difficulty, because "digital education must be everyone's right". The project is called "PC4U.tech" and was conceived by four 18-year-olds from Milan, including two students from Salesian schools: Pietro Cappellini, who is attending the fifth year of Graphics at the Technical Institute of the Salesians, a secondary school; Matteo Mainetti, Jacopo Rangone and Emanuele Sacco, in the last year of the scientific lyceum of the Salesians. For their commendable service they were awarded by the President of the Republic Sergio Mattarella with one of the three plaques awarded on Thursday (not yet physically delivered) "for having reduced the digital divide".

The idea was born last May: "We created a web platform," explains Pietro, who has completed his secondary school education at the Salesian Institute and would like to enroll in Communication Design at the Politecnico. “Both students who need a PC or tablet and families or companies that have second-hand devices to donate can write to the platform. We do everything ourselves: we collect the computers, refurbish them with the help of the 'IT Without Borders' network and then deliver them to those in need."

These youngsters not only showed their generosity and technical skills, but also their entrepreneurial spirit: thanks to crowdfunding, they have raised more than 18 thousand euros to invest in the project.

The first to believe in the initiative were the Salesians: the Director of the "Sant’Ambrogio" Salesian Institute, Fr Renato Previtali, and the Dean of the High School, Fr Damiano Galbusera. “This plaque is a great satisfaction, but even greater is the happiness in seeing people who are moved when they receive a PC as a gift. I am reminded of Peter, an elementary school child who had just arrived from Egypt: with the PC he was able to follow the lessons and meet his new classmates," says Emanuele, in the last year of the course in Applied Sciences at the scientific high school of the Salesians. “After school I will do Physical Engineering at the Politecnico. My dream? Becoming an entrepreneur,” he adds.

Jacopo, who attended the "Hockerill Anglo-European College" in England for the last two years and now would like to go to the United States to attend a Business School ("But with the aim of returning to Milan in the future," he specifies), he describes his reaction after learning about the award: “I was on the train with Matteo; by chance we were going to Rome to talk about our initiative on a talk show. My mother sent me a congratulatory message, then many others arrived… We found out like that. I was moved and immediately made a video call with mum and dad.”

Also excited Matteo, of the fifth year of the Leo XIII Liceo Scientifico (who would like to study in Barcelona next year, at the Transformational Business and Social Impact course): "We hugged, then I called my grandmother: she was extremely proud."