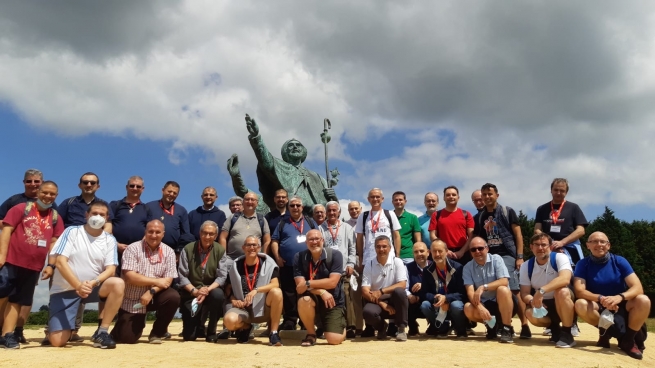 Held in the “San Martín Pinario” Seminary, located right in front of the Cathedral of Santiago de Compostela, the formative days were used to address various issues related to the tasks of animation and governance of the Salesian Director. Fr Juan Carlos Pérez Godoy, Councilor for the Mediterranean Region, accompanied the work sessions, encouraged and thanked the Directors for the service they provide the communities.

Fr Jesús Manuel García, professor of Theology at the Salesian Pontifical University (UPS) in Rome, focussed on the figure of the Director, proposing an "instruction manual for Directors". And taking advantage of the fact that he was in Santiago de Compostela, one of the most popular pilgrimage destinations in the world, he spoke of the Director as a pilgrim and proposed an experience of itinerant prayer and meditation, along the final part of the Camino de Santiago. The participants thus went to Monte de Gozo, about 5 km from the city, and in an atmosphere of prayer and reflection, they walked the path to the Cathedral of Compostela, concluding the day with their participation in the pilgrim's Mass.

Another theme addressed was the service of the Salesian Director with a specific focus on community animation and governance, which was presented by the Rector Major Emeritus, Fr Pascual Chávez. Psychologist María Teresa Simón and Dr. Gabino Carmona then talked about how to animate a community, about interpersonal relationships, and how to exercise leadership in the educative-pastoral community.

Fr Stefano Vanoli, Secretary of the General Council, with the Provincial Economers of the two Spanish Provinces (Spain-St James the Greater - SSM; and Spain-Mary Help of Christians - SMX) respectively, Bro. José Manuel González, SDB, and Fr Antonio Echeto, presented the technical aspects of the Directors' tasks and their responsibilities also at an economic level.

Finally, Fr Javier Valiente, Spanish National Delegate for Social Communication, explained the role of the Director in the communication of each work.

Participants also had the opportunity to visit and get to know Santiago's cathedral, recently restored, and to participate in the pilgrim's Mass on several occasions. For the organizers - the Spanish National Delegation for Formation and the Provincial Vicars of the two Spanish Provinces – this time together, in addition to offering valid formation on specific topics, are useful for allowing the Salesians of the Mediterranean Region a chance to know each other and sharing experiences and moments of prayer and reflection on the Director's task.