Mexico – From dialogue with the authorities come fruits for neediest communities 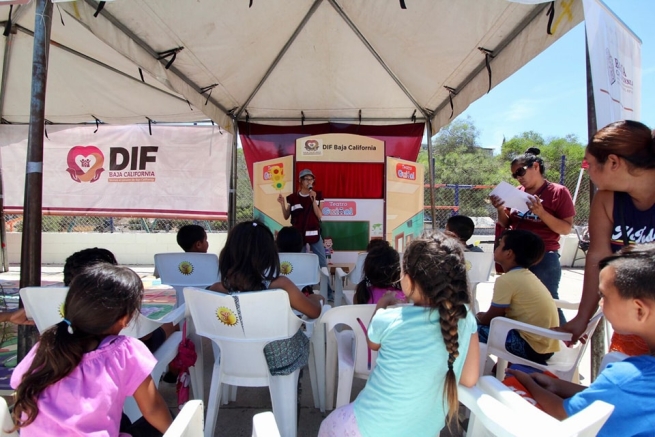 (ANS - Tijuana) - Last Saturday, August 6, the 1st Service Fair was held at the "Santo Domingo Savio" Oratory in Tijuana, one of the six works that make up the "Proyecto Salesiano Tijuana A.C.," located in one of the poorest and most violent neighborhoods of the city, especially in recent times.

The concern of the Salesians in this area of the city has to do with the increase in criminal violence (murders, drug trafficking...) and also the population's lack of access to health and social services.

These issues were discussed in a dialogue between the Director General of the "Proyecto Salesiano Tijuana A.C.," Fr. Agustín Novoa Leyva, SDB, and the Secretary General of the Baja California State Government, Dr. Catalino Zabala. During the meeting, the Salesian work on the border in favor of migrants and people in situations of social vulnerability was discussed, as well as the most urgent needs of these people, to which the various Salesian works in the city are tirelessly dedicated. It was thus decided, with the support of various government agencies, to implement various activities in Salesian centers to bring services closer to the local community and to enable the staff of these agencies to better understand the needs of the local population.

In this first edition of the Service Fair, the Civil Registry office was present for the issuance and regularization of birth certificates, as well as medical and dental services, offices for crime prevention and drug circulation, activities for children, adolescents and youth, welfare programs for the disabled and elderly, land regularization, delivery of trees for reforestation and access to public services such as water and electricity.

In addition to the Secretary General of the Government, authorities from the Secretariats of Welfare and Security of the State of Baja California, the Director of the Faculty of Dentistry of the Autonomous University of Baja California (UABC), the State Chairwoman of the System for Integral Family Development, and the Commander of the Tijuana National Guard were also present.

In his welcome address to inaugurate the Services Fair at the Salesian work, Fr. Novoa Leyva stressed the importance of every Salesian work in the city being both a religious center and a center of social integration, "since our objective is to form good Christians and upright citizens, so all our activities must take into account the wholeness and spirituality of the human being. This is what motivates us and what drives us to ensure that people, on the one hand, encounter God, the engine and center of our lives, and on the other hand, can also assert their rights within the society in which they live."

Those who participate in any capacity in the "Proyecto Salesiano Tijuana A.C." cannot remain indifferent to the poverty and social deficiencies of local communities. The promotion of initiatives such as this Service Fair is an example of the good that Salesians constantly seek to promote.