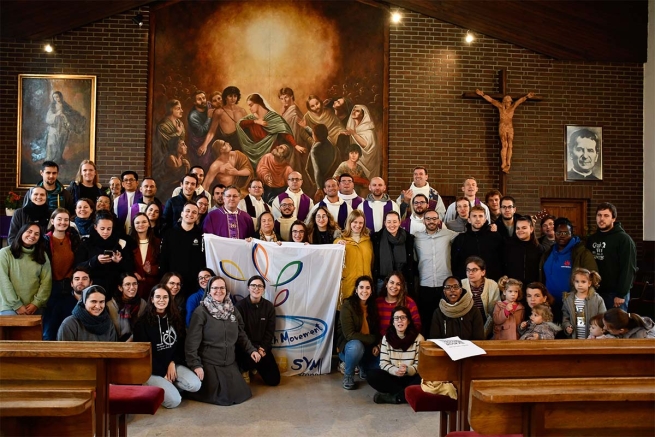 (ANS - Zagreb) - Last weekend the Oratory of Juarun, a district of Zagreb, hosted the XVIII General Assembly of the Salesian Youth Movement (SYM) of Europe and the Middle East, which was attended by about 70 people from 15 countries. All united by the charism of Don Bosco and Mother Mazzarello, for the growth of many young people throughout the continent. Present were the General Councilor for Youth Ministry, Fr. Miguel Angel García Morcuende, and the General Councilor for Youth Ministry of the FMA, Sr. Runita Borja. The SYM of Europe and the Middle East embraces the entire continent and creates joint relationships between Salesians, Daughters of Mary Help of Christians, and young people from many countries.

The place chosen for this important event is emblematic. In fact, in Juarun, the Salesians have built a church in memory of the 15,840 Croatians who died during the Croatian war of independence.

Living this experience in such a place reminded all the participants of the importance of peace; a theme, the latter, which has acquired vital importance in Europe after the outbreak of war in Ukraine. The church of Jarun, dedicated to the Virgin Mary, is indeed a monument of peace, as are the Croatian people who welcomed the Assembly in Zagreb and who were happy to host an international event in their local reality.

During the assembly, it was possible to reflect on the state of SYM Europe, its organization, and on the next steps to be taken together in the following years. Many ideas and themes came to the attention of the Assembly and a process has begun which will lead the Salesian Youth Movement to grow in faith, visibility, and mutual support among the participating countries.

There was also time to share some good practices that every national SYM has experienced in their own country, and to give the opportunity to get to know each other better, which is not a given, especially after the pandemic. Prayers, short games, and informal coffee breaks were some of the moments in which it was possible to experience the Salesian spirituality of joy and family. As many of the participants said: "in every house of Don Bosco we feel at home". The Zagreb Assembly was no exception to this rule and, thanks to the young people of the Croatian Youth Movement, there was also the possibility of making a short visit to the city center, strolling through the nice Christmas markets.

Finally, the Assembly elected the new "Small Team" for SYM Europe, which is now made up of 7 young people: Sean from Ireland, Iva from Croatia, Katarzyna from Poland, Paula from Spain, and Giuseppe from Italy. To complete the new composition, Marta and Pablo, who are finishing their mandates, have accepted the invitation to continue their committed service for another year, to ensure an easier transition and continuation of the path of SYM Europe. With them are Sr. Lolia and Fr. Joebeth, who respectively represent the FMA and the Salesians in the "Small Team".

This 18th SYM General Assembly, in Zagreb, represented a time of challenges and changes, in which the participants had to discuss many issues and how to address them. But it was also a moment of great joy and familiarity, in which people from different countries were able to meet in the name of Don Bosco and Mother Mazzarello, keeping their joyful spirituality alive.