Italia – Feast of Mary Help of Christians: seeing, feeling and touching the love for the Mother of Jesus 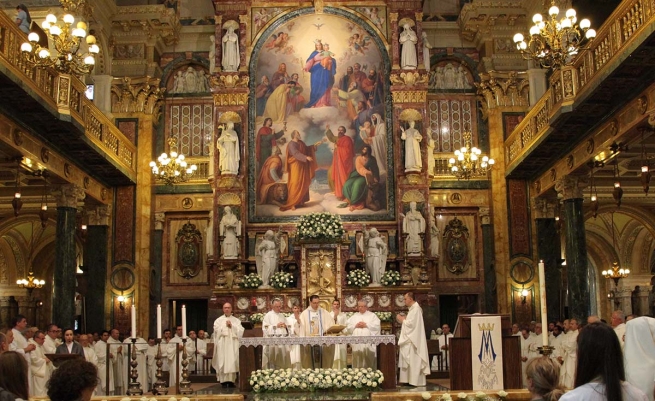 (ANS – Turin) – Mary as a missionary disciple, Help of Christians because she is the most direct way to reach Jesus: Fr. Ángel Fernández Artime, Recgor Major of the Salesians, yesterday, May 24th, renewed his personal Marian devotion and the one of the thousands of faithful present in Valdocco on the occasion of the Feast of Mary Help of Christians, recalling the essential traits of the “Mother of Jesus”, who with maternal care always leads back men and women to Her Son.

After concelebrating the morning Mass with the Archbishop of Turin, Msgr. Cesare Nosiglia, in the afternoon the Rector Major, as per tradition, presided over the Eucharistic concelebration for the Salesian Family and the young, with an attendance of about 8000 people.

The Tenth Successor of Don Bosco evoked his recent journey to Mexico and the pilgrimage to the Sanctuary of Our Lady of Guadalupe. “On the hill of Tepeyac, She carried Jesus in her womb, not for herself, but to make him known. Here in Valdocco, in this magnificent picture Lorenzone painted after the inspiration of Don Bosco, She carries the child in her arms giving him, showing him, making him known”, Fr. Á.F. Artime remarked.

Wherever She appeared, the Virgin always brought a message of closeness and help, so that all men and women may live: more rooted in the Gospel of Her Son (“My soul glorifies the Lord and my spirit rejoices in God, my Saviour”); more attentive to His Word (“Do whatever He tells you”); and more available to His will: (“Behold, I am the handmaid of the Lord, let it be done to me according to your word”).

The Rector Major then invited all the members of the Salesian Family, encouraged by their trust in Mary, to thank God for the gift of their vocation and for the example of their founders, and in particular expressed gratitude for the centenary of the foundation of the Secular Institute of the Volunteers of Don Bosco.

Soon afterwards, with the presence of the delegations of numerous oratories, schools and centres of the Salesian Family of Piedmont, Italy and of the world all over, there was the solemn procession of Mary Help of Christians: 50.000 people paid their homage to “Don Bosco’s Madonna” with hymns and prayers. “One could feel the faith of each one and of all”, was the comment of the Rector Major on Facebook.

Many photos are available on ANSFlickr.