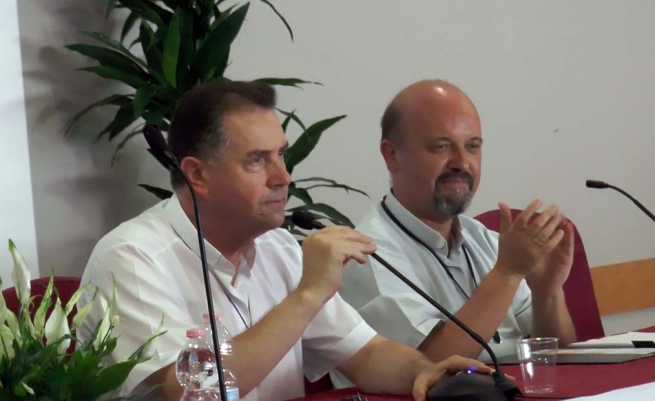 (ANS - Rome) - From July 31st to August 3rd, the Salesian Team Visit regarding the new Mediterranean region was held at the General House in Rome. Led by the Rector Major, Fr Ángel Fernández Artime, his Vicar Fr Francesco Cereda and some members of the General Council, other participants included: the Provincials and their respective councils of the Provinces of Italy, Portugal, Spain and the Middle East. The purpose of the Team Visit was the Verification and Programming of the Congregation's various Sectors of Animation via various reports delivered by the Councilors of the Sector and of the Regional Councilor to the assembly.

On the last day, after thanking participants for the shared climate of communion and fraternity, and for the preparatory work carried out by the Provincials and their respective councils, the Rector Major, Fr Ángel Fernández Artime, outlined 13 points on which to proceed and where the main challenges of the Mediterranean Region lay.

A region that, established only a few years ago, already has its own identity and moves its first steps towards a path of unity and international scope, says the Councilor for the Mediterranean Region, Fr Stefano Martoglio.

In a closing speech, Fr Ángel Fernández Artime reiterated his conviction of the positive path the Mediterranean Region has taken, despite the many difficulties, and reminded everyone of the importance of the contribution charisma offers the Congregation.

In a fraternal greeting to the participating assembly, the Rector Major also informed participants of the temporary transfer of the Community of the Pisana "Don Rua" to the House of the Sacred Heart, or Casa del Sacro Cuore, in Rome.