Vatican – The Cause of Fr Rodolfo Lunkenbein and Simão Bororo Approved 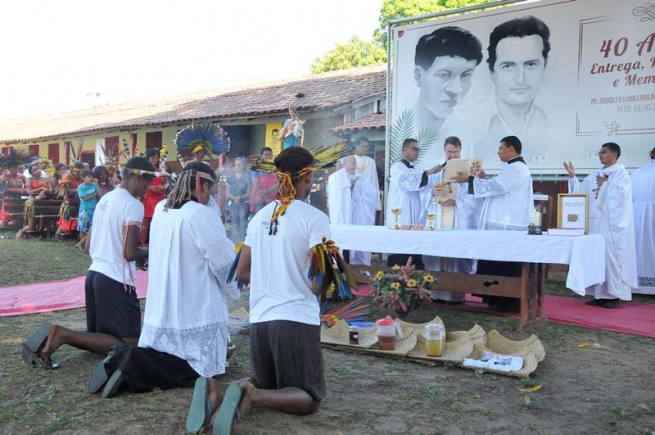 (ANS - Vatican City) - On September 7, the Congregation for the Causes of Saints communicated to Msgr. Protógenes José Luft, SdC, bishop of Barra do Garças (Brazil), the Holy See's approval for the cause of martyrdom of the Servants of God, Salesian priest Rodolfo Lunkenbein, and Simão Bororo, layperson, both killed in hatred for the faith on 15 July 1976 in the Salesian mission of Meruri (Mato Grosso - Brazil), two men who gave their lives for God, the people, land rights, prophets of the Kingdom, defenders of the poor.

Postulator of the Causes of the Salesian Family

The priestly motto that Fr Lunkenbein had chosen for his ordination was: "I have come to serve and give my life." In his last visit to Germany in 1974, his mother begged him to be careful because she had been informed of the risks that her son ran. He answered, "Mom, why are you worried? There is nothing more beautiful than dying for the cause of God. This would be my dream."

With their sacrifice, Fr Lunkenbein and Simão Bororo have witnessed that there is Somebody among us who is stronger than evil, stronger than those who derive profit from the lives of the poor, those who crush others with their arrogance ... Martyrs do not live for themselves, do not fight to assert their own ideas, and they accept having to die only for their loyalty to the Gospel. One is amazed at the strength with which they have dealt with their trial. This strength is a sign of the great hope that animated them: the certain hope that nothing and no one could separate them from the love of God donated to us in Jesus Christ.