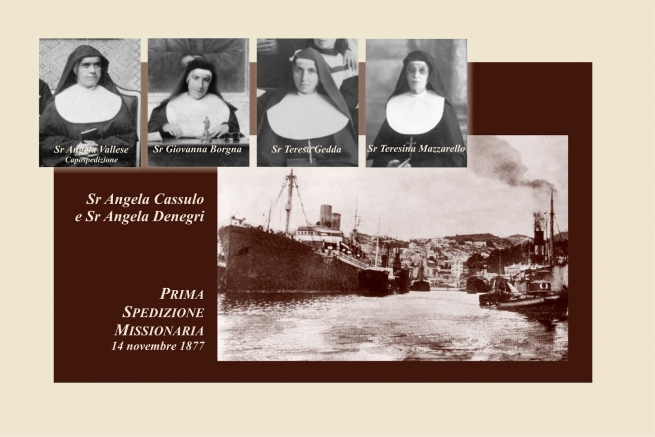 (ANS - Genoa) - Yesterday, November 14, 2017, the provincial community and the directors of the Province of “Madonna del Cenacolo” of the Daughters of Mary Help of Christians (FMA) met before the ancient port of Genoa on a barge near the famous Aquarium to commemorate a historical date: November 14, 1877, the day that led the FMA beyond the borders of Europe, transposing the charism of Don Bosco and Mother Mazzarello to the Americas.

Going beyond known boundaries to meet new peoples and cultures was characteristic of the style of the first FMA communities, eager to bring the most amazing and upsetting announcement to the world: the tenderness of God and His Love.

On November 9, 1877, with the blessing of the Holy Father, Pius IX, and the protection of Mary Help of Christians, the first missionaries faced this great journey. "The Sisters leave with special baggage: much trust in God, joy to announce the love of Jesus, humility before new customs and new cultures, willingness to live with sacrifices, knowledge that good may cost them as much as, should the situation demand it, the cross and martyrdom, in the conviction that when God asks: He asks everything! "(Chronicle II, pp. 276-291). From that port the first FMA missionary expedition left - with many others to follow.

From that harbor, indeed, began a page of history that still today continues to be written by many FMAs in 93 countries around the globe. With the departure of those first six FMAs - Sister Angela Valais, 23, Sister Giovanna Borgna, 17, Sister Angela Cassulo, 25, Sister Angela Denegri, 17, Sister Teresa Gedda, 24, and Sister Teresa Mazzarello, 17 – the spirit of Mornese crossed the ocean and reached the unknown "new world", where they began to give the gift of joy and hope to a multitude of children, young people, men, women, families ...

Mother Yvonne Reungoat, the current Superior General of the Institute, wrote, with reference to this anniversary: "Whoever follows Jesus is always on the go, cannot live a comfortable, sedentary life. The fervor, the fire of the Spirit, when it's there, can be seen; it operates and acts as a magnet. Missionary vocations can only arise where there is a fire that burns, where the spirit of the universe vibrates, as in Mother Mazzarello and in the first community of Mornese. This was the secret of the expansion of our Institute and many other Institutes of the Church."