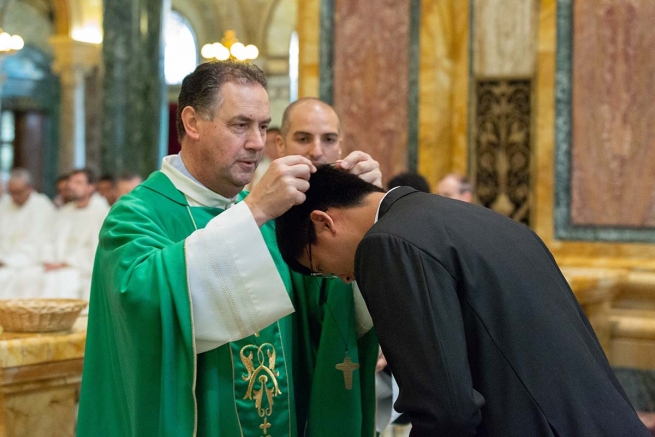 (ANS - Turin) - "In the name of Don Bosco and in the memory of the first missionary expedition, go and announce to the world's young and poor the joy of the risen Christ!" With these words, Fr Ángel Fernández Artime, X Successor of Don Bosco, sent the 25 Salesians and the 11 Daughters of Mary Help of Christians (FMA) of the 149th Salesian Missionary Expedition into and across the world.

The celebration, which took place on Sunday 30 September in the Basilica of Mary Help of Christians in Turin, also saw the participation of Mother Yvonne Reungoat, FMA Superior General, and numerous concelebrants: the Vicar of the Rector Major, Fr Francesco Cereda, Fr Guillermo Basañes, General Councilor for the Missions, and various Salesian Provincials.

Imagination, creativity, apostolic courage, patience in waiting, enthusiasm in love ... These will be some of the features necessary for the missionaries so that they be among the young as "signs and bearers of Salvation."

In the homily of the Mass, Fr Á.F. Artime reminded the missionaries they had received "a part" of the same spirit of Don Bosco and Mother Mazzarello. It is precisely that spirit, he said, that will lead them not so much to "doing, doing, doing ...", but to broadening the embrace and tender humanity of the early Salesians and early FMA to today's poor youth.

Then he urged them not to feel "masters" of the missions, but rather to serve, aware of being "the peak of an inverted pyramid". In this sense, therefore, listening will be fundamental, "to feel God and the cry of His people."

Finally, underlining how significant the testimony of 149 expeditions over 143 years is to the world, Fr Á.F. Artime renewed the invitation to dedicate oneself first of all to the most needy: "be tenacious and courageous missionaries from the little ones and the last," he concluded.

Of the 25 Salesian missionaries who received the mandate yesterday, five will now continue their missionary formation through a course offered by the Salesian Pontifical University, while the others, having completed the bureaucratic formalities, will immediately leave for their respective destinations. The 11 FMA of the expedition, for their part, will all attend a program of missionary formation that will end in June.

With some leaving before, others later, in the end everyone will start off on their mission to "proclaim the Gospel of life to the peoples" to be "for the young a fatherly and maternal presence of Jesus, who wants abundant life for everyone."

The video of the Mass is available on the Facebook page of ANS, curated by "IME Comunicazione". The photos are available on ANSFlickr.