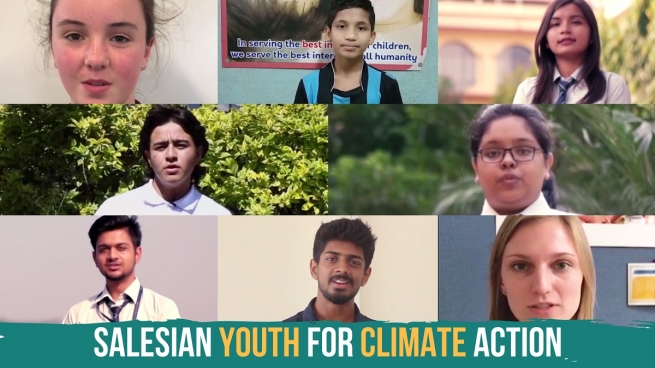 (ANS – Rome) – The 24th Conference of the Parties to the United Nations Framework Convention on Climate Change, or more popularly known as COP24, is being held between 2 and 14 December 2018 in Katowice, Poland.  COP24 is critically important because it aims to finalize the practical implementation of the 2015 Paris Agreement, which sought to keep global temperature rise this century below 2 degrees Celsius above pre-industrial levels and to pursue efforts to limit the temperature increase even further to 1.5 degrees Celsius.

To raise awareness about COP24 and also to give young people the opportunity to express their views on the climate crisis, the Don Bosco Green Alliance has been running a global campaign titled ‘Salesian Youth for Climate Action.’ This month-long campaign began on 15 November and will conclude on 14 December, the day COP 24 closes. As part of the campaign, social media platforms such as Facebook, Twitter and Instagram are being used to carry video messages from young people in Salesian institutions to world leaders meeting in Katowice.

Expressing his view, Daniel Alexander Muñoz Durango from Ciudad Don Bosco, Medellín, Colombia, asked the leaders to “commit to protect our water bodies, reduce waste and plant more trees. We also need to contribute together to make our ecosystem better.”  Katharina from Jugend Eine Welt, Vienna, said she would like to “urge the world leaders to reduce Greenhouse Gas emissions as quickly as possible. I commit to use eco-friendly modes of transport and reduce plastic waste as much as possible.” Okaka Jasper from St. Joseph's VTC Kamuli, Uganda, called on "the world leaders to end deforestation and encroachment on wetlands, while I commit to plant more trees and encourage my peers to do the same.”

Besides calling on world leaders to take the required action, the young people also stated their own commitments. Sophia, a student from Dominic College, a Salesian institution in Tasmania, Australia, said that as a member of the Student Leadership team, she commits to educate her school on reducing waste and keeping the planet clean.  Similarly, Manjhury Baruah, a student from the Assam Don Bosco University in India promised to “join hands to make our planet a sustainable and safe habitat for our future generations.”

The member institutions of the Don Bosco Green Alliance were also invited to hold awareness-raising programmes such as seminars, exhibitions and rallies, during the days of COP24 to spread awareness on Climate Change and related environmental problems.  The Don Bosco Green Alliance presently has over 80 member institutions from 27 countries.  It serves as a global platform, bringing together young people from Salesian institutions and organizations, to contribute to global environmental action, thought and policy.