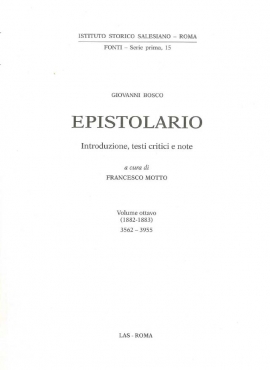 (ANS - Rome) – Published few days ago was the eighth volume of the Don Bosco Epistle in a critical edition, edited by Fr Francesco Motto, the Director emeritus of the Salesian Historical Institute, available at the LAS publisher in Rome. It contains 394 letters from the two-year period 1882-1883, many of which are unpublished - with all the obvious consequences towards a better knowledge of the human and spiritual life of the saint.

The volume differs from the previous ones for various aspects. First of all, because a good 25% of the letters are in French: a French more "spoken" than written, of Italian "flavor" rather than from beyond the Alps. Secondly, the recipient with the most letters is a forty-year-old French benefactor, Claire Louvet, who from this moment on exchanges with Don Bosco a dense correspondence of a spiritual character, practically continued until the saint's death.

Finally, it is a corpus of letters of which more than half written away from Turin-Valdocco. In fact, over the two years considered Don Bosco was "away from home" for a total of a whole year, of which 6 months in France.

These few details are enough to realize the historical-biographical-spiritual value of this correspondence. The thread that binds the letters is the daily life of Don Bosco interwoven with great events (long journeys, the triumph of Paris, the many missionary expeditions, the foundation of new houses, the Patagonian enterprise, the first Salesian bishop appointments, the painful closure of bitter conflicts with Monsignor Gastaldi ...), but also, and above all, his daily commitments: community appointments, private audiences, study, readings, visits to benefactors, and more.

What emerges is an all-round whole-hearted Don Bosco who, although physically fragile, gives his all to keep the Congregation alive and solid. It is now walking on its own feet, but Don Bosco remains, albeit from a distance, at the top, a reference point for major problems, a procurator of economic resources essential for development, a defender of his convictions, a vigilant "father and teacher" of young people, of confreres, of correspondents.

He is certainly not the "shadow of himself" as has been said; he will only be so later and, in fact, it will be seen in the next two volumes.