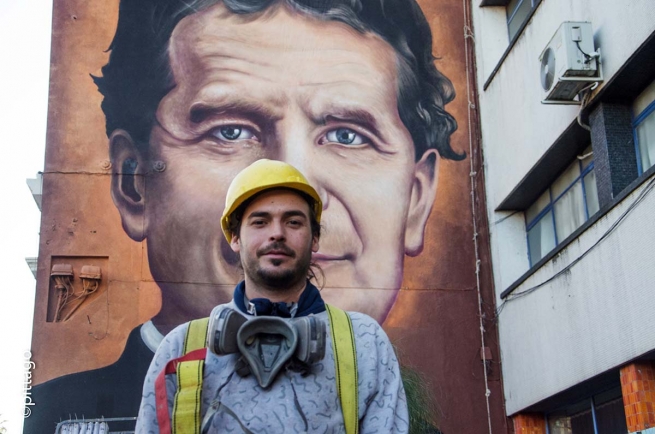 (ANS– Salto) – A huge mural of Don Bosco has appeared these past few days in one of the main arteries of the city of Salto, work of the famous Uruguayan graffiti artist and former Salesian student José Gallino.

On the occasion of the start of the centenary celebrations of the Salesian College “Nuestra Señora del Carmen”, in Salto (located north of the country, 500 km from the capital) founded on 16 August 1920, the murales of Don Bosco measuring 6 meters wide and 10 meters high, which covers one of the building's external walls, was commissioned, and stands right next to the entrance door.

José gallino is 33 years old, originally from Salto, and for 7 years he has dedicated himself to immortalizing various Uruguayan folk figures on the walls of the whole country. Artists, footballers, writers, communicators and even the technical director of the Uruguayan national football team are the protagonists of his works of street art.

The artist is very close to the ecclesial and, above all, Salesian world. He studied in the boarding school “María  Auxiliadora”, his brother at the Salesian college, his mother is a catechist and his father was sacristan in the Cathedral of Salto.

He first began his art by drawing graffiti based on animals and motifs related to the countryside and nature.

He painted the Don Bosco mural in just three days and he said it’s the highest one he has ever painted. He created it with an airbrush, setting down a foundation by brush and then applying a new layer with the airbrush.

When asked for the process of mural's execution the artist explained that the first thing he does is study; then, at the time of putting his ideas on a sheet, he creates a diagram that he then takes as a reference in the process of painting it on the wall “so the gigantography is well diagrammed.”

“When I was little I wouldn’t finish my works. I always left them half finished. I didn’t finish a work of art that I started painting. Now it's different; not only do I finish them but many times I restore them as I did for the mural of the footballer Cavani that I painted some time ago in Salto,” said the artist.

“Painting for me is a therapy. I don’t usually see how it’s coming, but once the work's at an advanced stage I move away and see what I’ve done. Sometimes I make mistakes, but the larger the work, the more precise they can be,” he concluded.