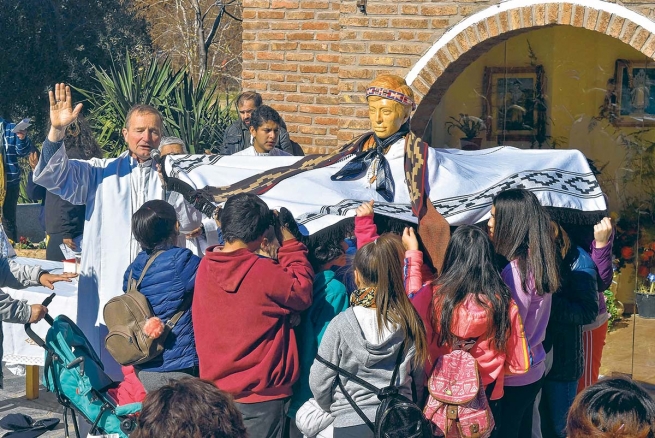 (ANS - Chimpay) - In a society marked by an extreme lack of faith, a world that is increasingly agnostic and distant from God, in a youthful context where faith in God is of no or little interest, the number of "small atheists", as the sociologist Franco Garelli has stated, increases. However, the figure of a teenager who has made his life a gift continues to be alive and present: Blessed Ceferino Namuncurá.

"The heart of the Church," writes Pope Francis in the Apostolic Exhortation Christus Vivit, "is also full of young saints who gave their lives for Christ, many of them even to martyrdom. They were precious reflections of the young Christ who shine to stimulate us and shake us from sleep." And, he continues, Blessed Ceferino Namuncurá "was a young Argentine, the son of an important leader of the indigenous peoples. He became a Salesian seminarian, with a strong desire to return to his tribe to bring Jesus Christ. He died in 1905."

These days, in the city of Chimpay, hundreds of families from across the country and beyond are gathering to pay homage to Blessed Ceferino and come to thank him and ask for a blessing. An estimated 400,000 people participating in these celebrations.

Sunday 25 was the busiest day with activities starting at 7 am with the dawn prayer, Holy Mass in the Sanctuary, the blessing, the missionary sending and the Holy Mass to greet the pilgrims. Today, Monday 26 August, Ceferino's birthdate, at 11 am, the central Mass will be celebrated in the Parque Ceferino next to the image of the Patagonian Blessed.

"Ceferino is particularly loved and appreciated by our Congregation," wrote the Rector Major, Fr Ángel Fernández Artime, "because he embodied in himself the sufferings, the concerns and the aspirations of his people and represents today a symbol: that of the will to overcome one's own limits with the support of faith. It is precisely for this reason that he is an example for many young people who, at a certain moment in their lives, feel a particular appeal to social commitment and solidarity."