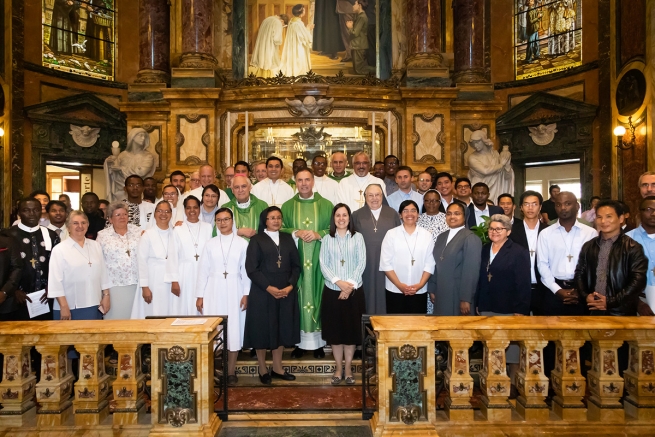 (ANS - Turin) - Yesterday, 29 September, the Rector Major of the Salesians, Fr Ángel Fernández Artime, presided at the Eucharistic celebration of the 150th Missionary Expedition during which he consigned the missionary cross to 36 Salesians and 13 Daughters of Mary Help of Christians in the presence of his Vicar, Fr Francesco Cereda, of the General Councilor for the Missions, Fr Guillermo Basañes, the Mother General of the Daughters of Mary Help of Christians, Mother Yvonne Reungoat, and Sr. Alaíde Deretti, Councilor for the Missions.

In front of the statue of Don Bosco in the courtyard of the Basilica of Mary Help of Christians, the Rector Major, together with the 36 new SDB missionaries of the 150th Expedition, began to prepare the ground to launch the 2019 missionary appeal, which he will do, as every year, for the feast of the Immaculate, December 8th. Surrounded by the Salesian missionaries of the 150th Expedition, the Rector Major wished to make the appeal to all the Salesians in the world from this very courtyard that saw the beginnings of our family and the consolidation of the Salesian charism.

Taking place immediately preceding this moment, in the theater of the Oratory of Valdocco, was the very youthful and media-savvy presentation of the 12 new FMA missionaries, by Sr. Alaíde Deretti, Councilor for the Missions, and of the 36 new SDB missionaries, by Fr Guillermo Basañes, General Councilor for the Missions, in three groups of "12 apostles". The recorded interviews of several missionaries are lively and definitely worth seeing. The event was broadcast live by Rete 7 and on various Facebook channels.

In the Eucharistic celebration, during the homily, the Rector Major emphasized the fact that today is a day of great celebration for the Congregation, the Institute and for the Church, in what is this 150th Missionary Expedition, 144 years after the first expedition of 1875, without interruption, even during the two terrible world wars.

Fr Á.F. Artime highlighted an interesting point. In the office of the Councilor for the Missions, there is the Book of Missionaries, which records 9,542 Salesian missionaries sent by the Rectors Major from this Basilica in the 150 Expeditions ... It seems that the real total number of those sent is more than 10,400. Our Congregations are recognized for the education and evangelization of the young, and with these numbers, we can safely say we are indeed and truly a missionary Institute and Congregation. The fire of love for Jesus has not allowed us to remain closed within four walls; on the contrary.

The most important point is precisely that Jesus is at the center of our lives: God calls us and sends us ... to share life, to give ... To witness Jesus with life, with the example of charity, with great respect for the diversity of each and every one...

The Salesian response to the extraordinary missionary month - October 2019, launched by Pope Francis - is this missionary sending, to enrich the presence of Jesus in all continents, except Australia this time.

The Rector Major, during the homily, then presented three examples of particular witnesses, since the world wants witnesses and not teachers / professors.

Monsignor Marcello Melani: Italian of origin, missionary for many years in Argentina. Once he finished his service as bishop in Patagonia (diocese of Neuquén), he returned to the province to which he belonged and served as parish priest and catechist. He felt ready to answer to the call of the Pope and the Rector Major, and his availability was accepted. He will go to Peru.

Fr Bashir Souccar: Syrian, 71 years old, expert in running the oratory with Muslims. From the MOR Province he made himself available and will go to Tunisia ... to bring the joy of the oratory, especially among young Muslims.

Fr Germain Plakoo-Mlapa: Togolese, he was present at the martyrdom of both Fr César Antonio Fernández (February 2019) and of Fr Fernando Hernández (May 2019), which took place in Burkina Faso; he was next to both and does not know why he was not killed too. Now he is here, recovering, and his heart is full of serenity and peace because he knew how to forgive and continues to live with the heart full of Jesus and his love.

Here is the testimony of life beyond words.