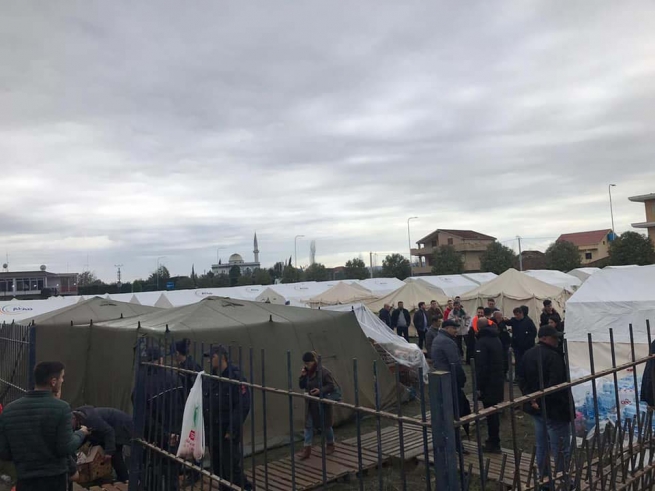 (ANS - Durres) – The powerful earthquake, 6.4 Richter Scale, that shook Albania in the early hours of November 26th has caused, according to the most recent estimates, at least 49 victims, about 750 wounded and countless displaced persons and homes destroyed. Rescuers and Armed Forces personnel are working tirelessly in the search for people still alive under the rubble and many international organizations are also working to support the local population in this emergency phase; among these, the Salesian NGO "VIS - International Voluntary Service for Development", which has been taking care of various projects in the country for years.

The greatest damage has been recorded in the cities of Durres and Thumane, but also in Kruje, Lezhe, Tirana, Lac, Lushnje and Fier. The authorities have deployed Armed Forces and police to support the relief efforts and the government has activated emergency shelters. Food support and hygiene kits are the most urgent needs and, as winter has already arrived, the availability of blankets is also a priority.

Several states are also providing support, including Italy, Greece, Kosovo and Romania, as well as the European Union.

The epicenter of the earthquake occurred far from the Salesian presence, which is why there were neither victims nor material damages in the works of the Salesian Family. Meanwhile, a reception center for displaced persons is being set up in Tirana at the Salesian facility.

Furthermore, VIS is supporting Caritas Albania in the emergency and post-emergency plan activated after the earthquake. Caritas interventions in this phase are focusing on visits to areas most affected by the earthquake for the distribution of First Aid kits; in the search for information and reliable data for the coordination of relief; in the activation of a network of volunteers; in launching an emergency plan, also coordinated with the network of Caritas Europe, in view of what may be the many needs that will emerge.

Further information on the VIS site.