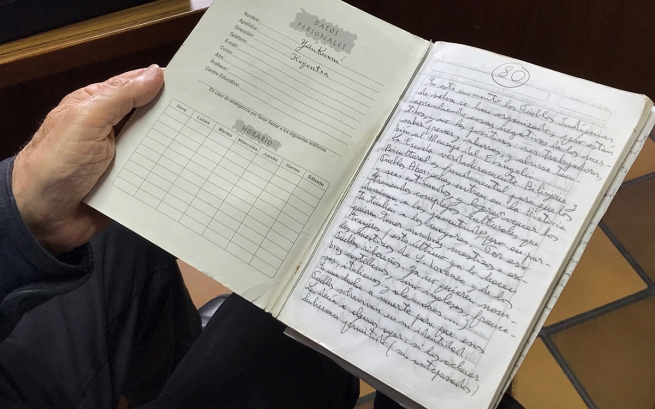 (ANS - Kuyuntsa) – "Father Luis Bolla was one of the great missionaries of recent times," said Fr Giovanni Bottasso, who recently passed away. On 22 October 2018, the Ecuadorian publishing house "Abya Yala/UPS" presented the 14 volumes that contain the testimony of 50 years of Father Bolla's missionary life. But those writings only go to 2012. Missing was a notebook to conclude the life of this missionary, who died on February 6, 2013. A few months ago, Fr Diego Clavijo, a Salesian missionary in Kuyuntsa, managed to locate Diary 80. "It's a wonderful story of the people he loved and gave his whole life to."

After six years, the last diary of Fr Luis (Luigi) Bolla was found. Fr Vicente Santilli, SDB, has in his possession the original notebook, preserved in the "Santa Rosa" Province of Peru. Fr Clavijo, who worked with Fr Bolla for several years, found the diary with the simple title "80 Kuyuntsa": after 79 handwritten diaries by Yankuam (Twilight, what the indigenous Achuar called Fr Bolla), today it is possible to also read the last one, which allows readers to participate in his profound reflections of faith and on the work of the Achuar people.

“At this moment the indigenous peoples of the jungle have organized themselves,” Fr Bolla begins in the diary. “The truly bilingual and bicultural school is fundamental for Aboriginal peoples to enter history and be respected.”

Every evening, by the light of a candle, Fr Yankuam wrote in his notebook of his life with the Achuar, on his pastoral work and in the field, on his travels, describing anecdotes of every day's new adventures; but above all, he internalized his faith and his way of perceiving a complex reality in which he naturally inserted himself increasingly more.

Fr Bolla wrote until the last day he was conscious. His latest texts, in his own handwriting, were written during the Spiritual Exercises of 2013 in the retreat house in Chosica (Peru), when a sudden cerebral ischemia surprised him in his room on January 6. He never recovered and died on February 6, 2013.

The handwritten "Diary 80" gives us his last thoughts on that year's retreat, which seems to be his preparation for eternal life. He takes notes from the interventions and, as if he knew that he would have left for the clinic that day, he writes: "Jesus, stay with me and with all of us, as the evening is falling."

This last diary was transcribed by the team of the Historical Archives of Quito under the direction of Fr Juan (Giovanni) Bottasso who, before dying and reaching his friend Fr Bolla in Heaven, managed to leave behind this precious work.