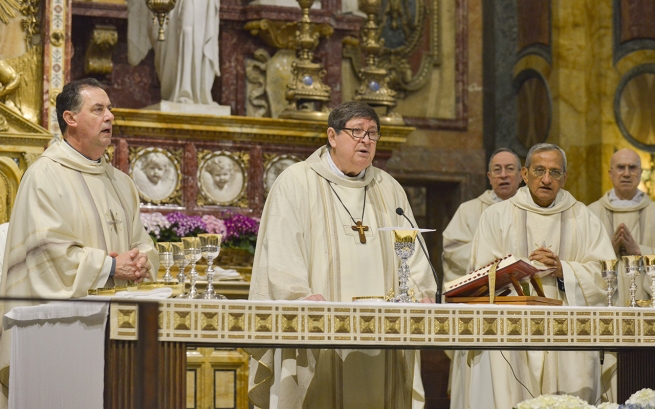 (ANS - Turin) - The official opening of General Chapter 28 took place on the morning of 22 February in Turin – Valdocco, after a week of work, almost a preparation and even a foretaste of what the life and experience of a chapter assembly that widens its gaze to the 132 Nations represented by the 242 Salesians present is.

The morning began with the Eucharistic celebration in the Basilica of Mary Help of Christians. It was presided over by Cardinal João Braz de Aviz, prefect of the Congregation for Institutes of Consecrated Life and Societies of Apostolic Life.

At 10.30 am, the Chapter Assembly met in the Teatro Grande inside Valdocco and began work with prayer and singing of the Veni Creator Spiritus and the prayer to Don Bosco proclaimed in multiple languages.

Fr Stefano Vanoli, Regulator, coordinates the work of the Assembly and, alongside Chapter members, were many Salesian guests, including Cardinals Oscar Andrés Rodriguez Maradiaga, Tarcisio Bertone, Ricardo Ezzati, and a number of Bishops.

The Bishop of Turin, Monsignor Cesare Nosiglia, who will be present on 29 February, also sent a message.

Cardinal João Braz de Aviz again took the floor; in addition to his greeting address, he made explicit in his own words the ecclesial context in which a general chapter acts.

The morning's work ended with the song Sub tuum praesidium.