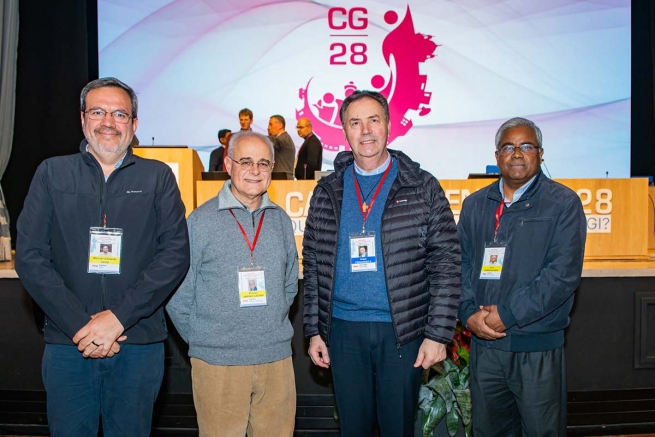 (ANS - Turin) - The General Chapter is a great two-faced "machine". The first, very important, is the spiritual charismatic one, custodian of the great hopes of the entire Salesian Family. The second, minor but necessary for the functioning of an authentic choral participation, is the IT network, the true nervous system of the chapter body.

Yesterday morning, Monday 24 February, the language translation test trials and a test on the votes were carried out. 222 voters contributed to fine-tuning the system.

This was followed by the appointment of the Secretaries, proposed by the Regulator and voted by the assembly. Fr Enrico Gaetan, Fr Luca Barone and Fr Daniele Merlini were elected.

It was then the turn of the moderators. The following were elected: Fr Manuel Cayo, Provincial of Peru (PER), Fr Jose Kuruvachira, Provincial of India-Dimapur (IND) and Fr Manuel Jimenez Castro, Visitor of Africa Congo Congo (ACC).

The capitulars then immersed themselves in the individual reading of the Regulations and then divided into the four commissions on the subject and the one (one) on the juridical subjects.

Today, Tuesday 25, will also be marked by small, but important procedural steps: approval of the GC28 Regulations is expected early in the morning; two sessions of presentation of the Chapter Work Tool are scheduled immediately afterwards - the text drawn up by the two Precapitular Commissions appointed by the Rector Major (the one on the theme of the Chapter and the one on the juridical aspects) which serves as the basis for discernment and which is structured around the three fundamental themes of the GC28:

The last activity of the day will be the presentation of the final summary of the contributions of the commissions on the Report of the Rector Major, with the opportunity then for the Rector Major to answer to the comments.