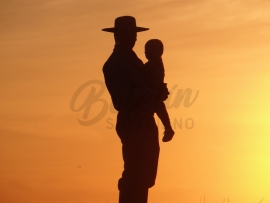 Jesus would not have learned what a father is, how to talk to him and listen to him, how to respect him and trust him ... if it hadn't been for Saint Joseph. Or who else do we think the baby Jesus called "Abbà" for the first time? Did he not obey him (Lk 2,51)? Wasn't he by his side in learning a trade (Mk 6: 3)? Therefore, if with Mary's "yes" (Lk 1:38) Jesus had a mother, with Joseph's "yes" (Mt 1:24) Jesus also had a father with whom he humanly learned to be a son.

For sure, Joseph was able to carry out the lofty mission of raising Jesus thanks to a special gift from the heavenly Father (Eph 3:15). But it is no less certain that he put all of himself into it: thanks to his fidelity to the mission entrusted to him, Jesus was able to see reflected in Joseph that Father who knows what his son needs before he asks for it (Mt 6,8-32; 7.11).

In this holy man we can all find an example, an intercessor, a support or a guide ... Especially fathers!

In the first place, because you're not born a father, but become one. And today learning to be a father is complicated. Second, because children often feel they have no fathers, even if they do. The numbers 176-177 of Amoris Laetitia speak of this: in many societies, the figure of the father is symbolically deviated or faded; his authority is viewed with suspicion; his manhood is questioned; his role is delegitimized.

In this context, as the psychoanalyst Massimo Recalcati says in his book The Telemachus Complex, it is urgent to recover the figure of the father. It is not an issue of being a "father-master", authoritarian or censorious, but of the "father-witness", a clear and defined male presence who, together with the mother, is close to their children in their growth, shows them horizons, accompanies them with love and steadfastness, and takes on the responsibility of passing on a legacy of life and faith to his children. The Pope repeats it in his letter Patris Corde: “the world needs fathers”. And he adds: "the Church too". In this Year dedicated to him, may Saint Joseph help us find these father figures we need.