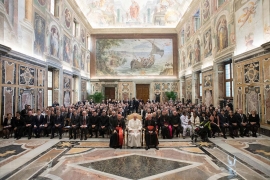 (ANS - Vatican City) - The Salesians are the children of a migrant, Don Bosco, who came from the rural area of Castelnuovo d'Asti and moved to Turin. The first people he worked for were young migrants and the first missionaries in Argentina had to take care of Italian migrants. But above all, today, the Salesians work with and for migrants, especially children and youth, in all continents. That's why the Salesians are taking part in the International "Migration and Peace" Forum, going on these days (21-22 February) at the Vatican.

The event was organized by the Department for Integral Human Development of the "Scalabrini International Migration Network" (SIMN) and the Konrad Adenauer Foundation.

Yesterday Pope Francis also took part. In his speech he asked people to be neighbours to migrants and he suggested four key words: welcome, protect, promote and integrate.

For their part, the Salesians Fr Martín Lasarte and Fr George Menamparampil from the Department for the Missions, had the opportunity to present the work of the Sons of Don Bosco with migrants. Migrants are the privileged recipients of the Salesian mission. Of 65.3 million refugees and IDPs (UNHCR data), more than half are minors and most of the others are also young.

In the different Salesian works - schools, vocational training centres, oratories, social works and parishes - in over 130 countries around the world, Salesians are in direct contact with around 10.6 million people, of whom it is estimated that 16% are refugees, IDPs or first or second generation immigrants.

The Salesian mission, therefore, involves about 1.7 million people “on the move”, including about 400 thousand refugees, displaced persons and asylum seekers.

Emergency operations are undertaken whenever necessary, but the priority for Salesians is the development of educational processes that, over a sufficient time, will enable migrants to enter the labour market and become members of the host society.

On the other hand, the Salesians also work to pass on to the host society the gospel value of solidarity.

They are also involved in specific initiatives against human trafficking such as those of "PARA" NGO in the Indian region, or "Stop Trafficking", in collaboration with the NGO "VIS" in West Africa and Ethiopia.

The Salesians also drew attention to the need to strengthen and develop more systematic global collaboration with other Catholic institutions working in the same sector.