RMG - Salesians for the Elimination of Violence against Women
Featured 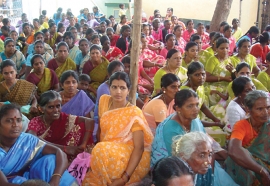 (ANS - Rome) – In the world, at least one woman in three has suffered some form of violence in her life: at home, at work, at school, on the street. "No one should be left behind: let's put an end to violence against women and girls" is the theme proposed by the United Nations on the International Day for the Elimination of Violence against Women, scheduled for tomorrow, November 25. It is an objective that sees the Salesians at the forefront, especially the most fragile and vulnerable women belonging to minorities and, for this reason, discriminated against - twice.

Dalits - commonly known as "untouchables" - live in most parts of India in a context of total deprivation of their human rights. Twice discriminated against, by sex and social condition, dalit women are victims subjected to injustice and abuse of all kinds.

In the Indian state of Tamil Nadu, the Salesians have been battling for years especially alongside the dalit children and women. Fully aware of the value of female education in stopping the vicious circles of violence and denial of rights, the Salesians have developed a project aimed at enhancing their self-esteem and professional skills and the program has now spread across 45 villages through 120 self-help groups.

There are two phases of the project, both lasting one year: the first is to make the dalit women aware of their worth and their rights; the second is to form them professionally. In this way, the results are long-term benefits to women, their families and their communities, and – importantly - the idea has spread that rights, dignity and opportunities depend neither on gender, nor social status.

There are success stories: like that of Rani, a dalit whose life has changed thanks to the Salesian NGO "VEMBU."

Forced to marry at the age of 18, Rani has three daughters. The oldest, 13, studies and works. The other two go to school – they attend elementary classes. A widow, Rani also has to take care of her old mother, but because she is a dalit and a woman, cannot possess land and has not had an education.

Now, however, attending the courses offered by VEMBU, Rani has begun to believe in a different future - for herself, and for her daughters.

Further information is available on the "Don Bosco Missions" website.