Italy – For 70 years, an investment in hope
Featured 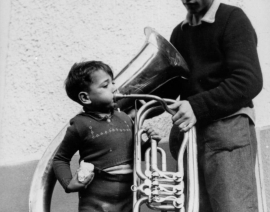 (ANS - Rome) – Fr Stefano Aspettati, recently appointed Provincial of the Salesian Circumscription of Central Italy (ICC), has been witness to the growth of the "Borgo Ragazzi Don Bosco" for seven years. This is how he describes the evolution of the educational experience at the Borgo, in the 70 years of the Salesian center.

It was March 22, 1948: the Borgo Ragazzi Don Bosco officially began its history. Many "sciuscià" (the street children of Rome after World War II) finally found a shelter, a place of peace, a family. The village is now 70 years old and today as then, in the changed social situations, it is a "house of peace for young people".

In 1948, while the Constitution rebuilt the founding values of democracy and the common good that the war had destroyed, works like the Borgo Ragazzi Don Bosco rebuilt young people destroyed and deprived of their affections through education.

This past May 17, some of our students were received by the President of the Italian Republic Sergio Mattarella who kindly welcomed them. They spoke to him, pointing out how many parallels there were between the fundamental values of the Constitution and what we do at Borgo, but also pointing out that some rights are unfortunately still not recognized, especially to the children most in difficulty and among them, foreigners. The President admitted all this, while acknowledging that much progress has been made because some of the protections that the Constitution provided for children were specified by subsequent treaties, but must continue to be monitored even today, so that they are respected everywhere.

The previous week, May 9, with about 250 children, operators, formators and friends of the village we went to the general audience of the Holy Father. Even Pope Francis, on meeting a delegation of young people at the end of the audience, invited them not to lose their youth, that is to say "do not lose hope". It is a beautiful encouragement that applies to both young and older people.


70 years are many: thousands of young people have passed through our schools, vocational training, the oratory and, in the last 20 years, from the family home, and from the center for minors. Scenarios, origins and poverty have changed, but the educational passion with which we try to support them has not changed.


Our mission is clear and also often made compulsory by a society used to "discard" the children who are not keeping up. They have no voice with which to ask for help. We try to give it to them.