Argentina – Salesians in Buenos Aires: a prophetic presence alongside the poor, today as in 1875
Featured 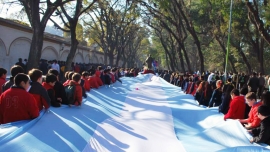 (ANS - Buenos Aires) – Ten, the number of Salesians who in 1875 first received the missionary crucifix from Don Bosco. Arriving in Buenos Aires, they were entrusted with the care of a newly built church dedicated to the "Mater Misericordiae", which immediately became the reference point for emigrants in Argentina, and the "Marian base" from which the Spiritual Sons of Don Bosco started the evangelization of Patagonia. Today that church, currently being restored, is just one of the countless signs of Salesian flourishing in the area of ​​the Argentine capital.

In the metropolitan area of ​​Buenos Aires, which brings together about 15 million inhabitants, the Salesians have large parishes and huge schools. But the most striking ones are now the works for the benefit of the poorest children: street children, the unemployed often slave to drugs, immigrants from Paraguay, Bolivia, Venezuela ...

These poor people settle in the peripheral barrios of the metropolis, but they are not treated as illegal immigrants as Argentina immediately recognizes them by issuing residence cards and guarantees as best they can access to basic services, such as school and health, that are public and free of charge.

The massive presence of Salesian works in the area of Buenos Aires is comparable to the number of works in Turin and Piedmont.

There are institutes with thousands of students, from kindergarten to upper secondary; and also "frontier works", born in recent years between the houses and shacks that welcome hundreds of thousands of poor people. It is also worth noting how in these parts the "shared mission" between Salesians and lay people is already a reality: some Salesian houses today are completely run by lay people, well prepared and in love with the Salesian charism.

A true missionary outpost in the peripheries is the "Don Bosco" parish in the municipality of Quilmes, south of Buenos Aires. Nearby, around 60,000 people live in inhuman conditions, amid stray dogs, mice and pigs that circulate freely on heaps of garbage.

The three Salesians of the community are poor among the poor, but they do everything to help the population: they have set up a cooperative that collects and differentiates the garbage. They have also started short vocational training courses (carpentry, metalwork and gastronomy) to teach young people a trade; and they have a family home that accommodates 25 needy children.

After a day together with these unfortunate children, the Salesians give them a wholesome dinner. Because very often these poor young people take drugs only because they are hungry and a little poison in their blood helps them to forget the misery in which they live.

Today, as in 1875, in Buenos Aires there are poor and abandoned young people who still need someone who loves them and helps them to grow.