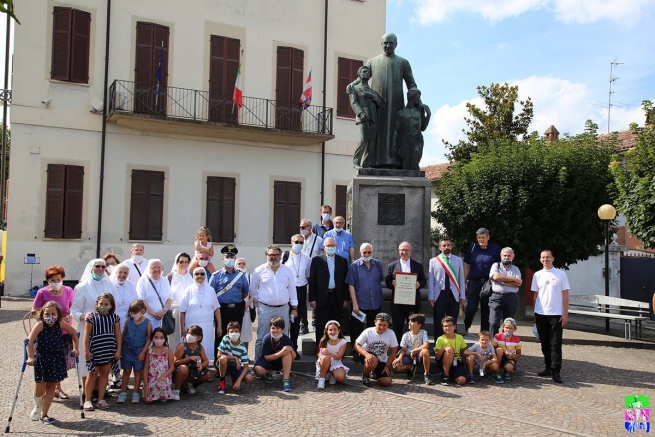 (ANS - Mirabello Monferrato) – Being celebrated - in addition to the centenary of the birth of Fr Egidio Viganò, VII Successor of Don Bosco at the head of the Salesian Congregation - is the 150th anniversary of the birth of Fr Pietro Ricaldone. Rector Major from 1932 to 1951, he was born in Mirabello Monferrato on July 27, 1870. For this occasion, his hometown remembered him with two days of celebration.

"Know, remember and rediscover Father Pietro Ricaldone, illustrious Mirabellese, who with ingenuity, humanity, tenacity and spirituality has left an extraordinary mark all over the world": this was the spirit with which the events took place, always celebrated in compliance with anti-Covid-19 safety provisions.

Saturday 25 July the inauguration of the exhibition "Don Pietro Ricaldone e l’opera salesiana, a Mirabello e nel mondo" took place at the church of San Sebastiano, once a place of worship for the historic Salesian Institute founded by Don Bosco in 1863. The exhibition traces the life of Fr Ricaldone, and beyond, through historical documents, curiosities and video documentaries. Afterward, at the parish church of San Vincenzo, the community rosary was recited in memory of all the Salesian from the Monferrato area.

On Sunday, July 26th, there was the opportunity to visit the Mirabellese places that are symbol of "Salesianity": the birthplace of Fr Ricaldone, the monument dedicated to him in Piazza San Michele, the church of San Sebastiano…. Then a circus art show took place, followed by an official commemoration of Fr Ricaldone, with the interventions of the civil authorities and several Salesians, including the ICP Provincial, Fr Enrico Stasi.

The celebrations closed with the Eucharist presided over by the bishop emeritus of Mondovì, Msgr. Luciano Pacomio, at the parish church.

Fr Pietro Ricaldone first met the Salesians at the institute of Alassio and subsequently also attended the schools of Borgo San Martino: it was there that he had the opportunity to meet Don Bosco for the first time. And precisely in the year in which Don Bosco ascended to Heaven, Fr Ricaldone entered the Salesian Congregation starting a path that led him, within a few years, to be appointed Director of the first summer oratory of Seville. The skills demonstrated by the young Fr Ricaldone prompted the Rectors Major (Don Rua, Don Albera) to assign him as an extraordinary visitor to the missions in Latin America, the United States, Mexico, and the Far East, sowing extraordinary seeds everywhere. Put in charge of the vocational schools, he knew how to give them powerful impulse, redeveloping them to very high levels.

In 1932, with a unanimous vote, he was elected Rector Major: a position he held for almost 20 years with ingenuity, spirituality and humanity, carrying out the Missionary crusade, the Catechetical crusade, and making the Salesian congregation grow enormously. During his rectorate, the canonization of Don Bosco and the beatification of Mother Mazzarello inspired the bold undertaking of the expansion of the Basilica of Mary Help of Christians. A high-minded, tireless organizer, of St Giovanni Bosco an extremely fond and diligent successor, he died in Turin on 25 November 1951 at the age of 81.