Italy – Don Bosco's real city were the young: presentation of the book "The City of Don Bosco"
Featured 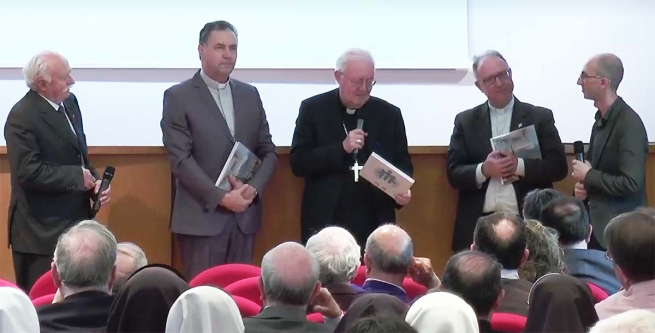 (ANS - Turin) - Yesterday, 23 May, the eve of the feast of Mary Help of Christians, the book "La Città di Don Bosco" was presented in Turin. Present for the occasion: the Rector Major, Fr Ángel Fernández Artime, the archbishop of Turin, mgr. Cesare Nosiglia, Fr Enrico Stasi, Provincial of the Special Circumscription of Piedmont and Valle d'Aosta (ICP), together with civic authorities and members of the Salesian Family.

In the first part of the presentation, 19th century Turin was symbolically reproduced, an evocative presentation of the harsh reality wherein Don Bosco lived. "A fog of shoeshine boys, wasters, poor people, rowdy lads …",  said the poem read by the Turin actress Laura Curino, who vividly portrayed the images of a city pervaded by poverty, misery, children and teenagers forced to work to survive.

Soon after, Fr Bruno Ferrero, Director of the Italian Salesian Bulletin and editor and curator of the book "La Città di Don Bosco", took the floor. "Don Bosco lived in a very difficult context, but with the ability to see and hear the cry of children and young people. Don Bosco is the saint who, among hundreds of people passing by, stops and sees a boy crying inconsolably on the roof of a building. It is Don Bosco who climbs onto the scaffolding to ask the boy: 'Son, what happened?' He is the only one who cares about the young of that time and who says: 'We must do everything possible so that none of our young people ends up in jail!'"

Fr Ferrero also thanked the team of the iNfo Salesian Agency (ANS) for the coordination and the photographers who made possible the production of this "photographic poem", especially the photojournalist Andrea Cherchi. It was again said how the origin of the book was the Rector Major's wish to present the true city of Don Bosco: "the young."

Readers who pick up the book will not find pages full of text, but rather images that speak. Because the real city of Don Bosco is the young, portrayed in beautiful photographs, are young people from the five continents that still today await the spiritual Sons of Don Bosco.

At the end of the presentation, the X Successor of Don Bosco thanked those who worked on the book which, he underscored, "is a tribute of gratitude to the city of Turin."