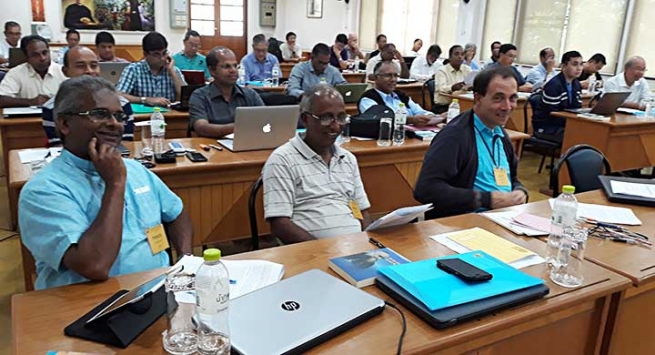 (ANS - Hua Hin) - The seminar on Salesian post-novitiates in South Asia and East Asia-Oceania ended in Hua Hin, Thailand, on 4 September. The seminar was an opportunity to share insights and experiences among the deans of the centers of philosophical studies and the formators of the post-novitiates of many different countries.

Under the guidance of the joint central team, led by Fr Ivo Coelho, General Councilor for Formation, and Fr Silvio Roggia, of the same Dicastery, together with the two regional coordinators, Br Raymond Callo, SDB, for East Asia-Oceania, and Fr Jose Kuttianimathatil, for South Asia, all the participating formators were able to take advantage of the high-level four-day seminar.

Numerous themes were addressed through a total of 14 work sessions. The methodology followed, which alternated group work and assembly sessions, highlighted the opportunities to be kept in mind for those in charge of fostering young Salesian vocations: the importance of accompaniment and of the presence of the formator were highlighted as cornerstones of the training or formation process; the value of personal permanent formation was also emphasized on several occasions; the training processes were analyzed with the outlook or gaze of today's young millenials; and the need to invest time and resources in the formation of young Salesians was underlined "because without it, there is no future" and "because formation is a thing of the heart and the keys are in God's possession."

Of note, the entire seminar was out almost entirely paperless, that is with an effective use of digital tools for sharing all contributions: training plans, lesson plans, curriculum, work group, presentation by the speakers ...

The appointment of Hua Hin is already the third interregional formation event among Salesians of South Asia and East Asia-Oceania over a period of about one year: previously, a seminar was held in Thailand, but in Sampran, on the Initial Proclamation (August 2017, with the participation also of the Daughters of Mary Help of Christians of both regions); and the training course for those in charge of the Prenovices, held in Cebu, Philippines, in November 2017.