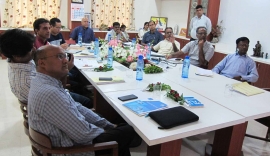 BOSCOM, which completes 25 years, founded on “the truth shall make you free,” promotes, coordinates, collaborates, plans, studies and researches the sectors of animation, formation, information, business enterprise, cultural and artistic patrimony within the South Asian context. The Regional Councillor for South Asia, Father Maria Arokiam Kanaga, complimented the many good things BOSCOM has achieved thus far. He said, ''we need to bring all the individual Salesian institutions working in the field of communications together for a unified vision, to effect desired changes in society.''

Conrad Saldanha, Principal Advisor at Don Bosco Centre for Learning [DBCL] Kurla prompted reflective analysis of the Salesian Leadership, Youth and Communications in South Asia. Father Noel Maddichetty, Director of BOSCONET, the resource mobilising network for the South Asia region, briefed the members on the recent developmental initiatives with 354 NGOs in the region through empowering the young-at-risk, skills for sustainable livelihood, empowering women and families, and caring for planet earth.

Father Savio Silveira, Convenor of the Don Bosco Green Alliance, an international eco-initiative across the Salesian world as a response to the call of Pope Francis in 'Laudato si,' the encyclical on the care for the environment, pointed out the first three global campaigns - Beat Pollution, Climate Action, and Clean Seas. Father Silveira, passionate to build up safe and better sustainable future for all, said, ''this alliance already has 40 members from 18 countries and we can hope that many more will join the bandwagon in days to come.''

The BOSCOM members also reflected on a plethora of activities in the pipeline beginning with the Rector Major and General Council Social Communication Plan for South Asia; 'What kind of Salesians for the Youth of today?,' the theme of General Chapter 28; BOSCOM Statutes; and the Salesian Bulletin. The members also deliberated the organisational coordination of the Don Bosco Youth Short Film Festival of India (DBYFFI), the flagship project of BOSCOM. The 3rd edition was hosted in 112 venues across India on January 18-19. Father David Maria Selvam is elected as the Director of the Festival with a core-committee to help further the process. The proposal to launch the Don Bosco Channel in India continuing its witness to the truth and spreading the joy of the Gospel was also deliberated.

Father Joaquim Fernandes, BOSCOM South Asia Delegate and Director of Tej-Prasarini Don Bosco Communications Mumbai, coordinated the event with inimitable finesse. He said, ''we have come a long way, since the inception. We have grown in leaps and bounds. It has been a wonderful journey and from here, BOSCOM can only forge ahead full throttle.''

Moreover, a new book - ''Sukhi Jeewan ka Tantar-Mantar'' - was released during the South Asia BOSCOM meeting at the Don Bosco Provincial House, Mumbai, on 29 July, 2018, by Father Savio Silveira. Aimed at the student and young adult segment of society, this resource book on values and emotions is authored by Father Norbert Damian Xalxo of the Salesian Province of Delhi, and published by “Bosco Communications”. The book seeks to address the various issues of turmoil and upheaval faced by the young in today's fast-paced highly evolving world. With a wide-ranging thematic approach, the book deals with: fear, anger, greed, optimism, health, friendship, positivity, environment, truth and righteousness, self-confidence, creativity, sympathy, compassion, leisure, contentment, discipline, bitter truths, etc.