Austria – "God wants to be by your side": Fr Tom Uzhunnalil's testimony for "Extraordinary Mission Month" 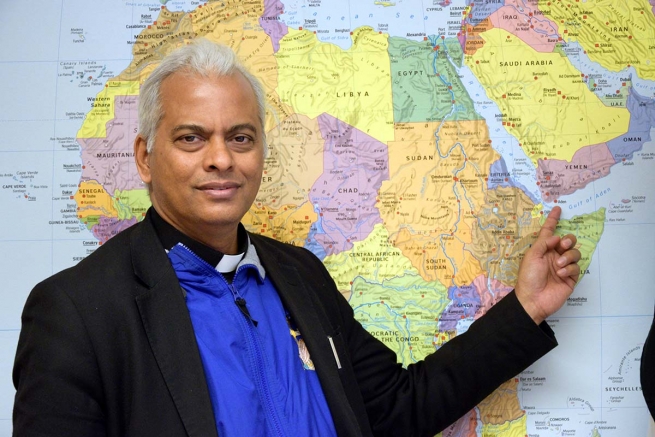 (ANS - Vienna) - Fr Tom Uzhunnalil, the Indian Salesian missionary kidnapped in Yemen by a militia command in March 2016 and released after 18 months, has been visiting Austria in recent weeks, bringing his testimony to the Salesian parish in Stadlau, in Vienna, in the "Don Bosco" schools of Unterwaltersdorf, at the "Salesianum" in Vienna and at the "Don Bosco" schools in Vöcklabruck - where he was also welcomed with joy by Msgr. Ludwig Schwarz, Salesian, bishop emeritus of Linz and former National Director of the Pontifical Mission Societies in Austria. At the end of this tour, and because of the Extraordinary Mission Month, Fr Tom spoke about the meaning of the mission.

What is the mission in Christian terms for you?
It is the idea of ​​going out, going to another country, another region and talking about Jesus and spreading the message of God's love to all people. Baptism, of course, must be something totally free and voluntary, not motivated by material or social interests, such as medical assistance, the opportunity to attend school or receive food.

What prompted you to go on a mission?
When I was in the tenth year of school, the Salesians came to my class to tell us about their work. Among us students, two said they were interested in such work - and I was one of them. So I came into contact with the Congregation, until I too became a Salesian. I worked for years as a teacher and at a certain point I asked my Provincial if I could take a break from teaching in schools: I wanted to go on a mission. It was granted and I arrived in Yemen, at the request of the Sisters of Mother Teresa, who had requested a spiritual accompaniment to the Salesians. In Yemen we were four confreres, divided into four parishes. We mainly took care of Christians from other countries who worked in Yemen.

How did the people of Yemen look at your work as a Catholic and missionary priest?
In the Aden nursing home, the residents knew I was a priest. I was clearly present as the spiritual Director of the Sisters of Mother Teresa. Once I also received a Koran and read the English translation. Humanly speaking, I had no problems with the people of Yemen, even though I didn't have much contact with the Muslim population.

What do you consider your mission today? And what do you recommend to Salesian missionaries?
My task today is to thank the people of the world who prayed for me during my imprisonment. Many Muslims and Hindus in my homeland also prayed for me. I have no grudge against my captors and I have forgiven them. Prayer is the strongest weapon, forgiveness is the best medicine. God exists, fulfills prayers and always answers. God wants to be by your side, even when it's difficult.

God calls each one to his task. We must not be afraid of difficulties. This is my message. Don Bosco told us that he cannot promise us a simple and comfortable life, but that we will always have bread, a lot of work and then: Paradise.