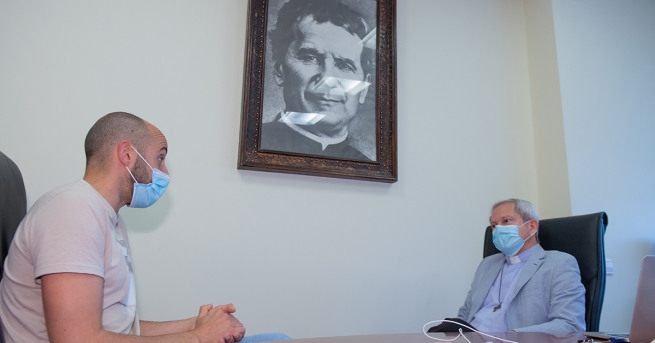 In one of the first acts of the visit to the Salesians in Lisbon, Fr Mendes met the Pedagogical Board of the Salesian school in the Lusitanian capital. Also on the first day, accompanied by the POR Provincial, Fr José Aníbal Mendonça, he was received by the Cardinal Patriarch of Lisbon, Card. Manuel Clemente. And at the end of the busy day, he met the Salesian community and the Pastoral and Economic Council of the “Santo Condestável” Parish.

While in Lisbon, Fr Mendes accompanied various celebrations, met the Salesians of the community, the Salesian Family, the teachers, the non-teaching staff and personally met the lay people who are co-responsible for the animation of some sectors. Among the individual meetings he had, there were those with the Pedagogical Director, José Morais, the head of administrative services, Aldina Cordeiro, the coordinator of the communication team, Miguel Mendes, the Director of Artisport, Duarte Ferreira, and the manager of the “SolSal” Salesian solidarity service, Alexandra Constantino.

By virtue of his role in the General Council, he paid special attention to the Salesians and employees who collaborate with the communication team, with whom he shared his very positive impression of the provincial organization. He noted with satisfaction that the team includes several Salesians and recalled that communication is one of the areas of greatest investment planned at the Congregation level for the new six-year term. “Our communication must have three characteristics: Salesian identity, creativity and quality,” he said. “Portugal is one of the places where I have seen more use of the arts in communication. In everything, not only in publications, even in Masses with students,” he declared with satisfaction. And he launched the challenge to work more closely with other areas of the mission, such as vocation ministry and volunteering.

During this time he was able to get to know the physical spaces of the oldest Salesian house in Portugal and share time with the young people, offering, at various times, prayer and the Salesian "good morning" ideas to the students.

On 24 May, he presided over Mass for the Feast of Mary Help of Christians, and collected thanks for the education received from the students who finish their studies this year.

Finally, on May 27, the General Councilor participated in the meeting of the Provincial Council and gave an account of his weeks of observation, animation and communion experienced in the POR Province. He presented a concise report with five guidelines for the government and animation of the Province to the Provincial and his council. On Saturday 29 May, the day before his return to Rome, he concluded the visit in a meeting with all the Salesians of the ROP, some connected by videoconference.