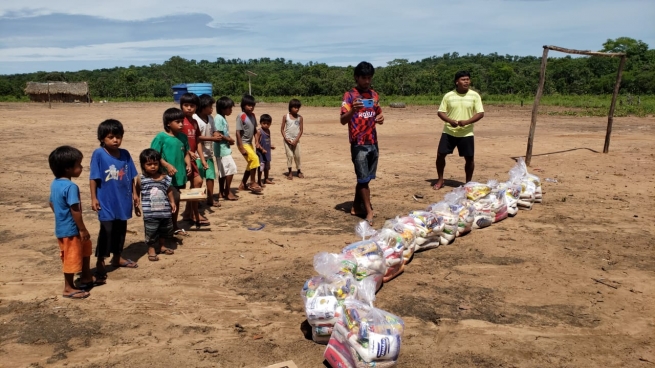 (ANS - Campo Grande) - In recent weeks, several benefactors from various parts of Brazil have spent their energies and resources to help a people in difficulty: these are the Xavante indigenous people who, among the many difficulties they encounter in this phase, even suffer hunger. The benefactors raised funds that were transformed into baskets of food and basic necessities that have already been distributed in recent weeks among the natives of the municipality of Campinápolis, in Mato Grosso (MT).

The indigenous: "The poorest of the poor". Indigenous people represent about 60% of the population of the municipality of Campinápolis. Today, there are about 10,000 Xavante indigenous people in the region, spread over more than 200 villages. Communities are extremely needy and require projects that meet their needs in terms of production, guidance and orientation in the cultivation of the land, including for cultural reasons, as well as financial support for the purchase of materials, fertilizers and seeds.

Hunger: One of the biggest problems faced by indigenous peoples is the question of subsistence, a problem that has worsened during the period of the pandemic. About 500 indigenous people are regularly hired by state and municipal governments to work in the field of education. But with the activities of the schools suspended to avoid infection, these contracts have not been renewed. Only in the month of May have these educators began to be hired. All of them survived with their families on the salaries they received, but without that resource, the families literally went hungry. There have been several cases of underweight and malnourished children, and even deaths of children due to illnesses aggravated by lack of food.

The benefactors: help came thanks to the intervention of the Salesians who work in the Personal Parish dedicated to St Domenico Savio, whose territory covers most of the villages in the area. Several initiatives had already taken place during the year. About 90,000 reais (equal to about 14,500 euros) were invested in baskets of basic food, in collaboration with the Salesian Mission, the NGO "Operation Mato Grosso", the "Immaculate Conception" Parish of Bilac, in the State of São Paulo, and the Indigenist Missionary Council (CIMI). But the needs are much greater than what has already been received. "This is the help we are giving, but we see that it is still too little to satisfy the great demand of the population," reveals Salesian deacon José Alves de Oliveira.

And yet for the natives, the little received seems a lot and the feeling is one of deep gratitude. Moisés, the deputy cacique (head) of the Xavante of the village of São Pedro, expresses this sentiment with these words. "This donation is a cause of great joy for our whole community, thank you very much". The same sentiment is expressed by the cacique Vitório, from the village Imaculada Conceição, where, in addition to food, clothes and shoes were also distributed. “Thank you so much for remembering us,” he testified.