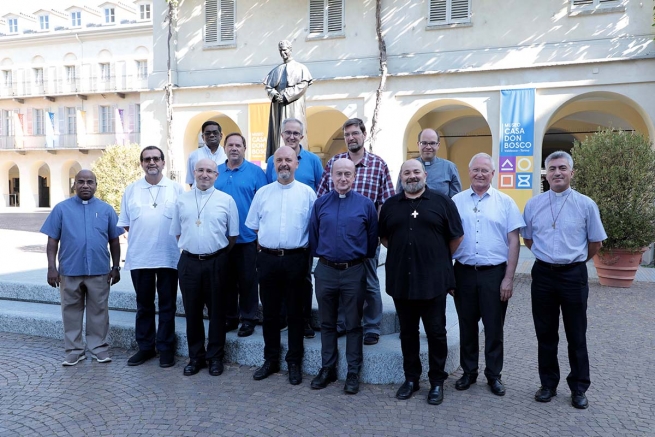 (ANS - Turin) - For the first time since the conclusion of the 28th General Chapter of the Salesian Congregation, a review meeting of the Provincials in the middle of their six-year term took place in Turin from 12 to 21 September. Chaired by the Rector Major, Fr Ángel Fernández Artime, and coordinated by his Vicar, Fr Stefano Martoglio, with his secretary, Fr Saimy Ezhanikatt, the event represented a reason for hope and a sign of a gradual return to normalcy in the life of the Congregation after the hard times of the pandemic.

Eight Provincials took part in the meeting, mostly from Europe:

The reason and central axis was the conversation of each Provincial with the Rector Major after three years of provincial service; an occasion to evaluate together the path taken by the Province in the light of the indications the Rector Major himself had given at the beginning of their mandate with the "road map", as well as other recommendations in the Letters drawn up at the end of the respective Extraordinary Visits.

At the same time, these conversations also constitute an expression of closeness and accompaniment on the part of the Rector Major with each of the Provincials. Care for the person of the Provincial, attentive listening to his needs in his tasks of guidance and animation, evaluation of the reality of the province, analysis of strengths, opportunities, challenges and areas for improvement etc., were the themes that were faced with typically Salesian parresia, friendliness and fraternity.

The daily schedule also included a formative program: thanks in the first place to the collaboration of the Salesians of the Special Circumscription of Piedmont and Valle d'Aosta (ICP), the participants were able to deepen the roots of the Salesian charism, the spirituality of Don Bosco, discernment, following Jesus, the centrality of Mary in Salesian spirituality, the consecrated Salesian identity in its two forms and testimony of docility to the Holy Spirit of Saint Maria Domenica Mazzarello.

Taking advantage of being in Turin, and adapting to Covid regulations, the participants were also able to visit significant places related to Don Bosco -an element that undoubtedly added an additional value to their experience.