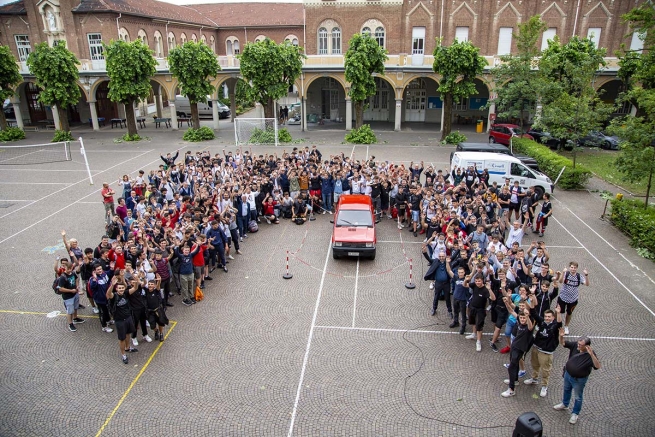 (ANS - Turin) - Ready to face the competition of an auction is the Fiat Panda 4x4 passenger car, registered in Don Bosco's centennial year (1988) and fully restored by the students of the Autovehicular Mechanics and Bodywork courses of the Vocational Training Center in Rebaudengo, Turin. On the day after the feast of Mary Help of Christians, they presented it flaming red to the people involved in the project - artisans, entrepreneurs, representatives of local institutions - as well as to the Superior of the Piedmont and Aosta Valley Province (ICP), Fr Leonardo Mancini, and the President of the Salesian Mission Office "Missioni Don Bosco" in Turin, Fr Daniel Antúnez.

The entire proceeds from the sale, which will be handled by "Aste Bolaffi" of Turin, will go to support the "sister" vocational school in Ivato, a town 15 kilometers from Madagascar's capital Antananarivo, where Salesian Fr Erminio De Santis relies on providence to offer free elementary school and vocational institute to more than 400 boys.

"It is a beautiful expression of an economy of communion," commented Fr Antúnez. When the world of vocational training comes into direct contact with the initiatives promoted to care for the most disadvantaged, the result can only be astounding and at the same time extremely formative. This is the case with this project, called "Panda 4 Mission," carried out with the valuable support of "Torino Heritage," an association that promotes automotive culture through the care of classic cars.

The project revolved around the rebirth of a vintage Fiat Panda. Young people from VTC Rebaudengo, in close contact with their teachers and with the support of companies in the sector, had the opportunity to completely restore the car, fine-tuning what they learned in their respective training courses. The car's interior was developed based on sketches created by the first-year students and viewed by Cavalier Giorgetto Giugiaro, the designer who invented the Panda in 1980, who chose the one to be applied to this unique piece.

On Wednesday, May 25, the car was presented at the Rebaudengo in a conference introduced by the rectors of the Vocational Training Center and the Salesian work, Mauro Teruggi and Fr Luca Barone, respectively, in which some of the students who collaborated on the project also took part, presenting photographic documentation of the stages of restoration.

"They put into practice the skills developed in the training course aimed at learning the trades of auto mechanic and car body repairman," Teruggi explained. Also speaking were Francesco Joly, Treasurer of "Torino Heritage" and donor of the vehicle; and Rocco Zito, coordinator of the Labor Commission of Turin's District 6.

The long-awaited moment of the car’s unveiling by the teachers who coordinated the restoration was accompanied by the blessing of those present by Fr Mancini, who stressed the importance that means of transportation take on "also to bring people closer together from the point of view of solidarity," which in this case concerns the students of a school on another continent.

Fr Mancini himself then got into the driver's seat of the car with which, together with Francesco Joly, he took an inaugural tour of the Rebaudengo courtyard.

In the coming days the "Panda 4 Mission" will face the traffic of Turin to arrive at the center of "Aste Bolaffi" where it will be auctioned on June 10.